Reinhardt University faculty and staff gathered in Flint Hall at Falany Performing Arts Center to officially start the 2018-19 academic year with the State of the University.

President Kina S. Mallard delivered the State of the University address on Aug. 13, highlighting accomplishments of those who encompass the University while projecting future successes for the upcoming year.

“The State of the University Address gives us the opportunity to gather together and renew our commitment to Reinhardt, to look at the past year to celebrate our accomplishments with a glimpse into the future,” she said.

Mallard said the Bible verse for the 2018-2019 year was Hebrews 10:24, “And let us consider how we may spur one another toward love and good deeds,” a verse calling for encouragement and doing so to bring out the best in one another on campus.

“I want to celebrate some of your great work over the last year. You have done remarkable work, and we want to acknowledge that this morning,” said Mallard.

Academics made many accomplishments, including 161 publications and performances, 58 presentations, 21 honors and awards and 82 acts of service outside Reinhardt.

With so much to be proud of from last year and numerous developments to improve campus life in all areas, this year was declared by Mallard to be Reinhardt’s best. 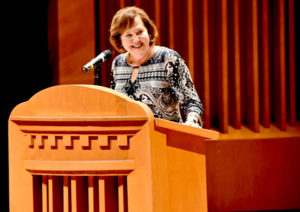