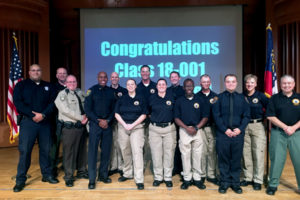 Public Safety Institute Director Trey Drawdy honored four students during the ceremony, including one participant who earned the very first award of its kind for her community service efforts.

“Stella Vasquez went above and beyond for community service outreach,” Drawdy said. “She collected donations for Convoy of Care during relief efforts for Hurricane Michael. She volunteered her time in assisting with packing and delivery.”

Vasquez, a Canton resident, also led the way to make Christmas better for a family in need. “She identified a local family that has fallen on hard times and took it upon herself to collect donations, shop for and wrap presents for this family. She presented the gifts on behalf of her class and the Public Safety Institute,” Drawdy said, adding the award came with a $1,000 scholarship toward an Associate of Science in Criminal Justice.

While the community service award was new to the Public Safety Institute, three graduates were presented with longstanding awards given to members of each class. John Souders Jr., of Kennesaw, earned the Academic Award for having the highest academic average for all exams and assignments administered over the 20-week academy. Greg Verlander, of Gainesville, received the Top Gun Award for having the highest shooting average in firearms qualification attempts. And, the prestigious Director’s Award was given to class leader Christopher McHugh, of Alpharetta.

The celebratory evening was about the accomplishments of the police academy graduates, but Drawdy made certain the families of each participant knew their important role. Midway through Class 18-001’s training, spouses and children of the police academy participants were invited for a meal and fellowship, and were recognized for the support they give their family member.

“I want to really thank the families of these graduates for sticking by their side over the last 20 weeks. Without the support of their families and their loved ones, they would not have been able to achieve this,” Drawdy said. “And as these graduates enter the field, they will need that continued support.”

The Reinhardt University Public Safety Institute’s police academy program began in 2009 and has graduated more than 350 certified peace officers. The 20-week program offers Peace Officer Standards and Training certification in classes held in the evenings at the Cherokee Sheriff’s Office Training Facility in Canton. Completion of the program results in 15 credits toward an associate degree. For more information, contact Erin Hager-Henthorne at (770) 720-9203 or email Erin.Hager-Henthorne@Reinhardt.edu.