Two of Reinhardt Public Safety officers learned how quickly an emergency call can move from incident to tragedy – or rescue.

Officers Marcus Lamb and Travis Spriggs were on patrol on January 28 when they received a call about a house fire from the Cherokee Dispatch around 5:25 p.m. A propane heater in the living room of the Waleska home caught fire. While all residents made it out of the house, their dog remained trapped inside. 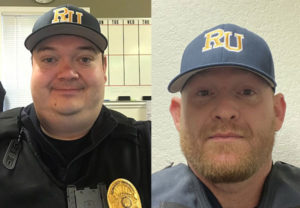 From left to right: Officers Marcus Lamb and Travis Spriggs

Fortunately, the incident was less than a half a mile from Reinhardt’s campus allowing the officers to arrive at the location within minutes.

“When the call came out, I knew we were probably the closest first responders to the area and that the address was within the city limits,” said Lamb. “We could advise on the nature of the fire and ensure everyone was out and safe. Also, we could put out the fire if it was small enough and save property damage for the family.”

Officers Lamb and Spriggs broke down the door, rescued the dog and put out the fire with an extinguisher. Five minutes after they arrived, three Fire Department trucks made it to the residence and the scene was cleared ten minutes after the call was received.

Director of Reinhardt’s Public Safety, Jay Duncan, felt both officers acted admirably and was grateful for their ability to “be of assistance extinguishing the fire and helping the family pet exit the residence safely.”

“Both Officer Spriggs and Officer Lamb appropriately responded to an incident which could have been catastrophic had the fire continued to spread. Although primarily tasked within the jurisdictional boundaries of campus, our department has strong working relationships with Cherokee County Emergency Services and the citizens of Waleska and are willing to assist in any way that we can.”

Reinhardt’s Public Safety department monitors the Cherokee County Sheriff’s Dispatch and is occasionally called on to assist in the community when close by to an area in need of assistance.

“When a call comes out within the immediate area of the campus that I can assist with, like helping direct traffic, road closures for down power lines, looking out for vehicles that have a BOLO [be on the lookout] on them, I try and help,” said Lamb. “It doesn’t happen often, but on occasion, I get asked by the deputies to assist them on calls when I am the closest unit to them, for things like standing by on traffic stops or patrolling roads when there is a lost person.”

Thank you to Reinhardt’s Public Safety Officers for keeping our campus and our community safe.