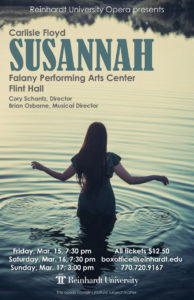 Lead character, “Susannah,” is a role that will be shared by senior Brianna Perez and junior Victoria Hill, and directed by Dr. Cory Schantz with musical direction by Brian Osborne.

Perez, reflecting on Susannah’s story, says this character resonates with her own struggles, and that she has “learned from her perseverance.”

“The show has taught me that when you stand strong with your convictions, you can persevere.” Outsiders have a place in this world and deserve to be treated with humanity.”

While the original opera was written in the 1950s, Perez finds its themes to parallel with topics today’s audience can find relatable.

“It’s been the greatest artistic challenge of my life. I’ve grown so much, and it’s made me feel even more strongly about the ability of performance to connect with an audience,” Perez said.

Playing the role of “Olin Blitch,” Dylan Cronan said this character has been one of the most difficult characters he has ever portrayed.

“I’ve had to realize just what a seemingly kind person is capable of doing,” said Cronan. “The scariest part about Blitch and this show is how rooted in reality they are. The experience has been humbling and incredibly rewarding.”

“Susannah” will run March 15 and 16 at 7:30 p.m. and March 17 at 3 p.m. at the Falany Performing Arts Center. Hill will play the role of “Susannah” March 15 and March 17; Perez will perform the role March 16. Tickets are $12.50 and can be purchased by emailing boxoffice@reinhardt.edu or online at Reinhardt.tix.com.