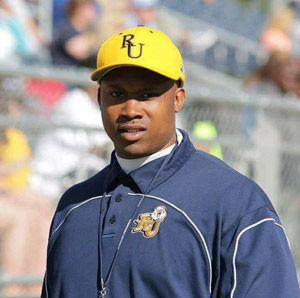 Coach Quentin Moses died in a house fire Feb. 12, 2017. He was 33. Moses was in his fifth year as defensive line coach for the Reinhardt Eagles football team.

“Reinhardt University is deeply saddened by the news of the passing of our coach and friend, Quentin Moses,” said Reinhardt President Kina S. Mallard.

“As a University founded and undergirded by our Christian faith, and in the words of St. Paul, ‘We do not grieve as those who have no hope’ because our faith teaches us that Quentin Moses is more alive now than he has ever been before in the presence of his Lord.”

“Along with my Leadership Team, our Board of Trustees and our faculty, staff, students, alumni and friends, I offer our most heartfelt condolences today to Quentin Moses’ family. We want you to know that we stand with you as you grieve,” said Mallard.

According to news reports, Moses, along with a woman and her 10-year-old daughter, died after having been in a house fire in Monroe, Ga. The cause of the fire is under investigation.

One of the most talented defensive linemen in University of Georgia history, Moses was serving his fifth season with Reinhardt as a defensive line coach. In 2016, Moses coached two first team all-conference performers: Tevin McCoy and Javier Dyer (2015 Mid-South West Co-Defensive Player of the Year). Moses’ group also totaled 139 tackles for loss and were ranked second in the nation with total sacks (46).

“Quentin Moses was an integral part of our coaching staff, but more than that he was a person who believed in our student-athletes and worked hard every day to help each athlete perform at the highest level on the field and in the classroom,” said Reinhardt Head Football Coach James Miller.  “We will miss his leadership, and I will miss his friendship.”

Reinhardt University’s football team gathered earlier today as a family to talk about Moses and how the team will move forward.

“We talked together about what it means to lose someone so loved by our players, coaches and supporters of Reinhardt Eagles Football,” Miller said. “And we talked about how we will recover from this and go on to do the work that would make Coach Moses proud – together.”

Over his career at UGA, Moses received a litany of accolades, including All-SEC First Team honors, several SEC defensive player of the week awards and Walter Camp Second-Team All-American status, among other awards. A member of three different National Football League teams, Moses is most famous for his time with the Miami Dolphins.

“Obviously our entire program is reeling today from this tragic news,” said Bill Popp, Reinhardt’s Athletic Director. “Our biggest concern today is to do anything we can to support Quentin’s family and to provide support and counseling for our student-athletes.”

A campus celebration of life service will be held Wednesday, Feb. 15 at 1 p.m.