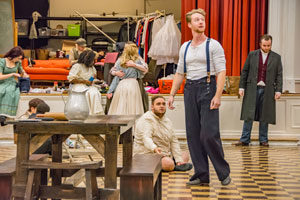 Theatre students rehearse in the Hoke O’Kelley auditorium for their upcoming production of “Sweeney Todd: The Demon Barber of Fleet Street.” Photo by Jeff Reed

Prepare to be entertained and drawn into the dark side when the Reinhardt University Theatre Department performs “Sweeney Todd: The Demon Barber of Fleet Street” Nov. 18-20 at the Falany Performing Arts Center in Waleska.

“Returning to London to exact vengeance on people who did him wrong, Sweeney Todd goes insane,” said David Nisbet, director of Sweeney Todd and Reinhardt University Theatre Program coordinator. “He starts killing people – even though he is killing innocent people, he never loses track of his main objective of retribution for those who have wronged him.”

Deploying his barber shop and chair to lure in his victims, the story of Todd – set in 19thCentury London – is based on a book by Hugh Wheeler, and songs and lyrics by Stephen Sondheim.

Nisbet called Sweeney Todd a “dark play” and said the characters have a lot of “dimension.”

The musical, featuring seniors Nick Cothran in the role of Todd, and Mary Echols as his sidekick, Mrs. Lovett, runs next Friday through Sunday at Reinhardt’s Falany Performing Arts Center. Evening performances on Friday and Saturday begin at 7:30 p.m. and afternoon performances are at 3 p.m. on Saturday and Sunday.