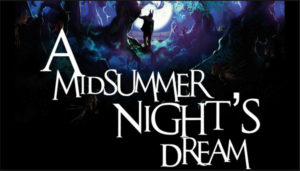 Reinhardt Theatre will be performing a “groovy” version of William Shakespeare’s “A Midsummer Night’s Dream” in the new Reinhardt University Theater next month.

“A Midsummer Night’s Dream” is a Shakespearean comedy that keeps the audience laughing and on their toes as love potions are administered, love triangles are created, and chaos breaks out among the characters. Except this particular version has a far-out 1960’s spin on the infamous play.

“In true spirit of a Shakespearean play, we are working on creating a show for those who enjoy humor and slapstick comedy. There will be a lot of physical action throughout the production,” said Stewart Hawley, assistant professor of theatre and director of production.

“I believe my favorite part about the show is the stage combat,” said sophomore musical theater major Lily-Anne Drawdy. “I love the challenges that come along with it and I know it’s something the audience will be surprised by.”

Dalton Myers, who plays the role of “Demetrius,” and Jonathan Bynoe who plays “Puck,” said the synergy of the cast is on-point for this production.

“I’m already having so much fun with the combat and other actors and actresses in the cast,” Myers said. “The chemistry between all of the cast is also beautiful within this show.”

“The vision and energy between this cast will bring laughter and surprise many. It’s something truly unique to be a part of,” said Bynoe, a sophomore musical theatre major.