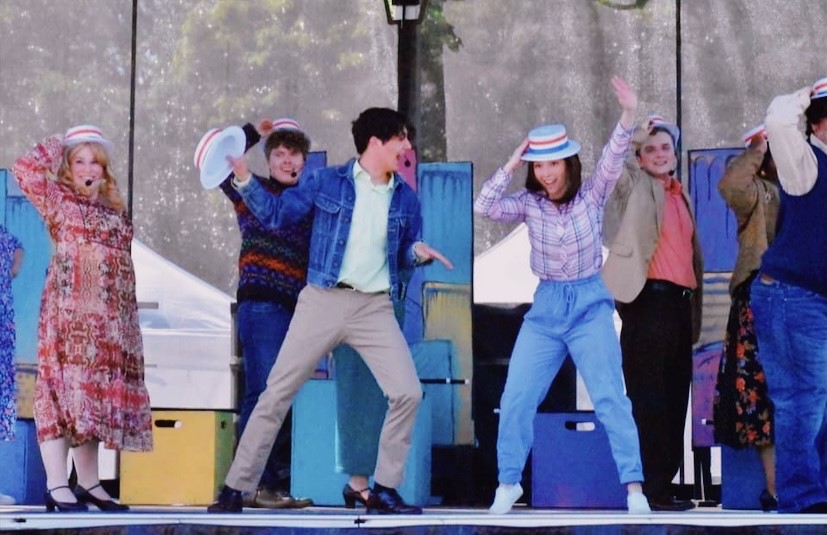 For the past two weekends, Reinhardt University’s theatre students were back on stage after a year without performances. “Company” was performed by Reinhardt actors on the Falany Performing Arts Center’s outdoor stage.

“Company was a very special production for me. Under difficult circumstances, this cast, crew and orchestra created a marvel of a show. It is a testament to the talent in the theatre program,” said Nisbet.

“Bobby is an incredibly challenging role that allowed me to stretch myself as an actor,” said Mitchell. “This was a very challenging show, but everyone really pulled their weight, and we had a great production.”

Performing on an outdoor stage required the actors to adapt to many new conditions not faced before the pandemic.

“Adapting to outdoor performing was probably the most difficult part of the entire process,” said musical theatre major Mackensie Eckenfels ’22. “All of us had to adapt to the weather, the difference in stage dimensions, and though we faced some bumps in the road during the process we persevered, and everyone played a part in making sure that we made the show happen.”

Eckenfels played Amy and was thrilled to return to the stage after missing out on performing live.

“Going into the rehearsal process for ‘Company,’ I was extremely excited to begin working on my craft again alongside my peers and professors. While rehearsing, we made sure to wear masks and follow COVID-19 protocols to ensure the safety of everyone, but this did not stop us from working to put on a performance for an audience. Rehearsals were just as they used to be: lots of laughs, hard work…it almost felt nostalgic. We were back where we belong.”

Through her performance, Eckenfels found a new character type to fit into as she learned to “become” and “present” a character she’s never played before.

“Working with Dave [Nisbet] in the early and mid-stages of rehearsal, we found different ways that I could make Amy unique and my own, and this brought a lot of enjoyable memories that I am forever grateful for.”

Eckenfels praises Reinhardt for finding innovative ways for its students to continue learning and growing in their field of study amid the pandemic.

“Knowing that I am at a school where the professors want to do their best to safely get us back to live performances is something that I am truly thankful for, and I can’t thank them enough for all of the energy that they put into making this show happen, alongside the crew and the rest of the cast. Theatre is a collective. It cannot happen with just one or two people. It takes every single person involved to step up and do their part of responsibility and effort to make shows happen, especially during a time like this when things are still uncertain.”