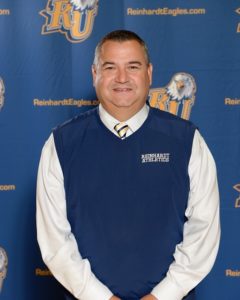 Bill Popp, vice president for athletics and athletic director, has been named the NAIA Athletic Director of the Year.

After one of the finest years both in the classroom and on the playing field for Reinhardt University, the National Association of Intercollegiate Athletics (NAIA) national office announced Monday that Vice President for Athletics and Athletic Director Bill Popp has been selected as the 2018 NAIA Athletics Director of the Year.

“The NAIA is thrilled to award Bill Popp this honor,” NAIA President and CEO Jim Carr said. “His dedication and integrity set an outstanding example for all NAIA athletics directors, and we’re extremely fortunate for his insight and contributions at the association level.”

“This has been a tremendous year for Reinhardt Athletics,” said Popp. “Our programs have experienced the most successful year to date, culminating with receiving the AAC Duard Walker trophy. To then be individually recognized amongst such an amazing peer group, is truly humbling.”

This prestigious national accolade comes shortly after Reinhardt Athletics received the 2017-18 AAC Duard Walker All-Sports Trophy for the first time in school history – an award established as a way of recognizing member institutions with the most successful all-around sports program for the year.

The Eagles also took home the Men’s All-Sports Trophy after combining for 813.75 points throughout the 2017-18 athletic calendar, and Tennessee Wesleyan was next in line with 733.333 points.

“I don’t know of a more deserving athletics director in the NAIA than Bill Popp,” AAC Commissioner John Sullivan said. “His leadership, strength of character and expertise have been instrumental in the growth and success of the athletics program at Reinhardt University.

“He is clearly a rising star and a great human being,” Sullivan added.

Through his leadership University wide, Reinhardt has developed more athletic programs, including football, all with a foundation of high academic standards and community service. The University, in 2017-18, had 106 Eagle Scholars – student-athletes with a GPA of 3.75 or higher – and an average GPA across all 22 teams of 3.15. Solely in the 2017-18 academic year, Reinhardt student-athletes performed nearly 1,000 service hours in the community with softball leading the way with more than 400 service hours.

“Reinhardt University is fortunate to have Coach Popp at the helm of our athletic department. He and his team of coaches and administrative staff have created an environment that encourages student-athletes to flourish at Reinhardt University,” said President Kina S. Mallard. “We are proud of all of Coach Popp’s accomplishments, and grateful for his leadership across the University.”