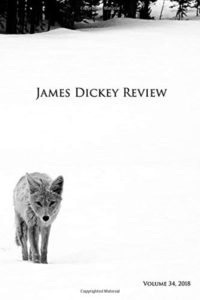 Cover of volume 34 of the James Dickey Review

In a New York Times article on August 10, 2018 announcing Silver’s death, Times writer Richard Sandomir wrote, “[Silver] she wrote with unswerving candor about living under the threat of imminent death, her love for her son and husband, and the parallel world of advanced cancer, where “healthy people fear us.”

Volume 34 contains a “Postscript” with a series of Silver’s last few poems and can be ordered by sending an email to JamesDickeyReview@Reinhardt.edu. Cost is $24.99.

“When Reinhardt launched its MFA in creative writing, we were looking for an opportunity to publish a nationally recognized journal to go along with the program and to offer our graduate students an opportunity to intern with a national publication,” said Provost Mark Roberts, editor of the Review.

Robert’s colleague, writer Casey Clabough, was the previous editor of the JDR and offered the journal to Reinhardt.

“Publishing the JDR is a real honor, especially for those of us who have admired the work of Georgia native, James Dickey,” said Roberts. “It’s a privilege to be able to continue the legacy of the journal and to contribute to advancement of Dickey’s name as a great literary artist.”

The James Dickey Review publishes works that study James Dickey’s poetry, fiction, screenplays and non-fiction, and short reflections and meditations on Dickey as a person. The JDR also publishes all forms of creative writing that affiliate with Dickey’s themes, style and literary experimentation, along with critical reflection essays by contemporary writers, analyzing the influence of Dickey on their work and others. The magazine also publishes book reviews.

If you are interested in contributing to volume 35 of the magazine, to be published December 2019, submit your work to JamesDickeyReview@Reinhardt.edu in a Microsoft Word attachment by June 1, 2019.

The James Dickey Review can be purchased on Amazon, or by sending a request to JamesDickeyReview@Reinhardt.edu.