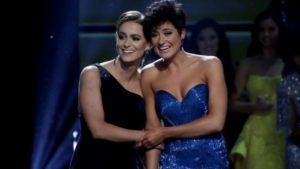 Cherokee County residents and the Reinhardt family sat on the edge of their seats across the state as Victoria Hill was called to become a semi-finalist, then to enter the top seven, top five, top three and finally, top two. When she became first runner-up, Victoria Hill jumped up and down with excitement for her fellow contestant.

Since becoming Miss Georgia in June 2018, Victoria Hill has used her title to give a voice to young ladies in the foster care system, competing at the national level to bring awareness to that cause.

On Dec. 19, Hill, a performing arts student, competed as Miss Georgia in the Miss America Scholarship Competition. The 51 representatives experienced two preliminary rounds before the final televised round. Hill walked into Thursday night’s competition with two preliminary wins, one in talent and the other from speaking on her social impact cause.

The re-branded Miss America 2.0 competition tests young women on their leadership, talent, communication skills and knowledge. During her time on the national stage, Hill interviewed for the job of Miss America, showed her opera performance skills in the talent round, spoke on “Flipping the Script on Foster Care” and answered questions side-by-side Camille Schrier, Miss Virginia and the newly crowned Miss America.

Hill plans to continue her efforts with the Angel House and WINGS (Women in Need Growing Stronger) program, and to use her position and resources to raise awareness about the foster care system, especially those about to age out of the system. Since earning her title, Hill has worked with local companies to provide improvements to the Angel House, proving that “you don’t need to foster to support foster care.”

“When you love and support children in foster care, you change their world, and that’s the most important thing,” Hill said on stage Thursday night.

Her efforts started before she earned the crown and will continue far after the next Miss Georgia is named. In addition to speaking at a variety of events, in which she never misses an opportunity to share her passion to “Flip the Script” on foster care, Hill hosted a concert at the Canton First United Methodist Church to raise money for her cause.

With her winnings from the state-level competition, and the $25,000 she won for placing first runner-up, Hill plans to attend graduate school after she completes her degree at Reinhardt to pursue a career as a professional opera singer.