During his 25 years as faculty at Reinhardt University, Rev. Dr. Curt Lindquist has learned what it means to be loyal, grateful and hopeful throughout his many adventures as an educator.

His first few years as a religion professor challenged Lindquist to change his mindset, letting go of his habits as a Christian scholar to become an educator of all religions, and as a result, he feels he grew more empathetic toward others. 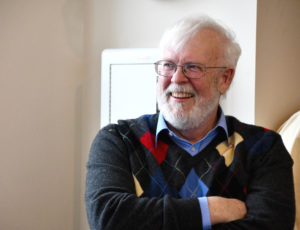 The time Lindquist spent on campus often took him anywhere except Waleska, where he encountered many places and many different kinds of people. His countless contributions to the University, from writing texts for his own courses, teaching students about the culture around them and reinstating the study abroad program—to name a few—will forever leave a lasting impact on the education of Reinhardt students.

“Curt Lindquist is an unconventional and extraordinary individual and professor—an encourager, supporter, pastor, educator, thinker and writer,” Theresa Ast said in his post-tenure review. “It has been my privilege and joy to work with Curt for 18 years and my great fortune to have him as Division Chair and School Dean for nine of those years.”

Throughout his journey at Reinhardt, Lindquist held many leadership positions alongside his role as professor. He served as Social Science Division Chair and Religion Program Coordinator in 1996-2000, Dean of the School of Arts and Humanities in 2000-2005, Chair of the Institute for Teaching Excellence in 2009-2014 and Chair of the Year of India in 2014-2015.

“The role he has played in building Reinhardt into the University that it is today is laudable. Dr. Lindquist is a wonderful asset to Reinhardt, contributing as an institution builder, teacher, coordinator, administrator and colleague,” said Ast.

When he wasn’t travelling the world, Lindquist frequently made presentations at Faculty Colloquia, such as “Spain’s Way of St. James: A Comparative Theology of Religious Practice.” He has also published several pieces in “Sanctuary,” Reinhardt’s literary magazine.

Lindquist spent his years in the Reinhardt community hoping to make the world a better place, saying that at Reinhardt’s best, “we care for each other as we open each other’s eyes to the bigger world around us.”

When asked for his advice to students, he said to “study seriously, make friends, figure out how to make the world a better place and be willing to be surprised by God.”

Lindquist will start his retirement traveling Nepal, India and Israel during Spring Break.