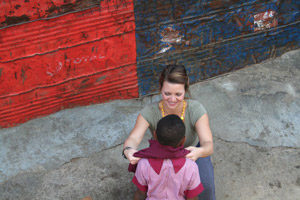 A sworn police officer who took her oath shortly after graduating from the Police Academy at Reinhardt University is expanding her horizons as the new public information officer for the city of Woodstock. In addition, the RU graduate has been named a Cherokee County Chamber of Commerce Top 10 in 10 Young Professionals to Watch.

Brittany Duncan, of Canton, graduated from the Police Academy at Reinhardt University in 2011. She started with Woodstock Police in 2007 as an administrative assistant. She later was named public information officer for the city police department and became a certified police officer.

As the city has grown so has the need for a citywide spokesperson, and now Duncan will be the go-to person for inquiries for the city and all of its departments, including public safety.

“I am excited and humbled for the opportunity to serve the city I love in this capacity,” Duncan said.

Duncan, in her role with the police department, also served as a reserve unit police officer, something she will continue to do.

She said her training at Reinhardt helped her excel in her career and she regularly applied her classroom knowledge to real-world experience.

“By graduating from Reinhardt’s Police Academy, I feel as though it has prepared me to be more knowledgeable in local government, state law and case law,” she said. “Applying what I learned in the classroom through real-life scenarios in the Police Academy really prepared me with a better understanding. I am grateful for the staff and instruction I received.”

Duncan embodies the Reinhardt mission in her daily life. A regular giver and kind-hearted person, Duncan has a heart for service. On Aug. 10, she left for her second mission trip to Kenya with Be Free Revolution.

There she is mentoring young children in the villages and working with the adults who struggle for each meal for their families on a daily basis.

“Our mission is to help others help themselves. Through this, we want to empower, counsel, and educate children to dream to be something,” Duncan said. “While in Kenya, I will serve the children of Wings of Life (a school located in Kibera, one of the world’s largest slums) and also serve the children of Pehucci Orphanage.  Along with providing food, clothing, and other basic necessities, we will also take them to camp Ignite where they will have the opportunity to have fun and be kids.”

Instilling hope and strong self-esteem in the people who live in the slums in Africa is a large part of the mission.

“We hope they gain self-confidence and motivation to achieve dreams while at camp,” she said. “When I went to Kenya for the first time in 2013, I shared with the children that I was a police officer in America. The children said ‘but you’re a girl’ and I told them that girls can be anything they want to be. To them, I think I became an instant super hero in their eyes. But, I hope that my graduation from Reinhardt’s Police Academy and then my serving as a Reserve Police Officer in Woodstock shows the children of Kenya that you can really be and achieve anything you want.”

Duncan is a strong representative of what Reinhardt instills in each of its students by her dedication to her job, community and international service. In addition to her international missions and daily work with the City of Woodstock, Duncan also serves on the Woodstock Public Safety Foundation as its secretary and is a member of the Chamber of Commerce and serves on its Government Affairs Committee. In addition to the Chamber’s Top 10 in 10 award Duncan received in June, she has been honored twice as the Woodstock Police Department Civilian of the Year (2009 and 2010), and in 2016, she was given the Tessa Basford Community Service Award.