School of Mathematics and Sciences

Waleska, Ga. – The numbers added up to victory for a select group of local high school and middle school students. More than 74 students competed in the sixth annual Reinhardt University/Cherokee County Mathematics Tournament hosted by the mathematics students and faculty of Reinhardt University. Nine high schools and four middle schools in the county were each represented with one or two teams of four students who competed for awards and scholarships. 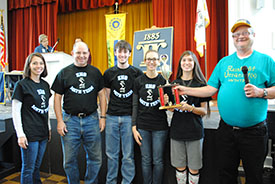 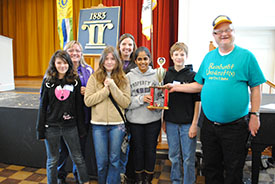 Each team was presented with a trophy, which will be engraved with the team members’ names and honor, by Dr. Richard Summers, Reinhardt professor of mathematics (seen in green in the photos), and Patricia Kearns, Cherokee County director of academic standards, professional/staff development and career pathways.

River Ridge High School took the top spot in the junior varsity individual competition with Alex Mcmath who earned first place, followed by Francis Mukoma of Etowah High School who took second place, and Greg Carroll of Woodstock Middle School placed third. These top six students were all awarded medallions, which will be engraved with their earned honor.