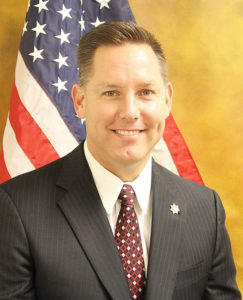 “We have 11 deputies enrolled in the Organizational Management and Leadership degree program at Reinhardt,” Reynolds said. “We also are promoting higher education for our commanders and managers for the sheriff’s office. Because Reinhardt and the sheriff’s office have that partnership, it’s a win-win-win for the agency, individual and Reinhardt.

“Dr. (Kina) Mallard has been very responsive to our needs as an agency,” Reynolds continued.

Reynolds started his education at Reinhardt in 1989, but he wasn’t sure what he was going to do. At the time, he planned to get into medical illustrations, so he began a degree in fine arts.

“Through a chance opportunity, I did a ridealong with Athens-Clarke County police and realized this is something I wanted to pursue,” he said. “I went back to Reinhardt and finished my degree in fine arts because I already had a lot of credits in that program.”

He earned his associate degree in 1995 and then pursued the Bachelor of Fine Arts when Reinhardt became a four-year school.

Reynolds admits he wasn’t the best student, but the support he found at Reinhardt helped him along the way.

Reynolds knows firsthand what a Reinhardt education can afford, and he wants the Cherokee Sheriff’s Office deputies to have the same opportunities. They can bring that education back to the agency and serve the citizens of Cherokee County.

“Being the sheriff now allows me to strengthen that partnership with Reinhardt. I believe we have a great relationship, and I only see it getting better,” he said.