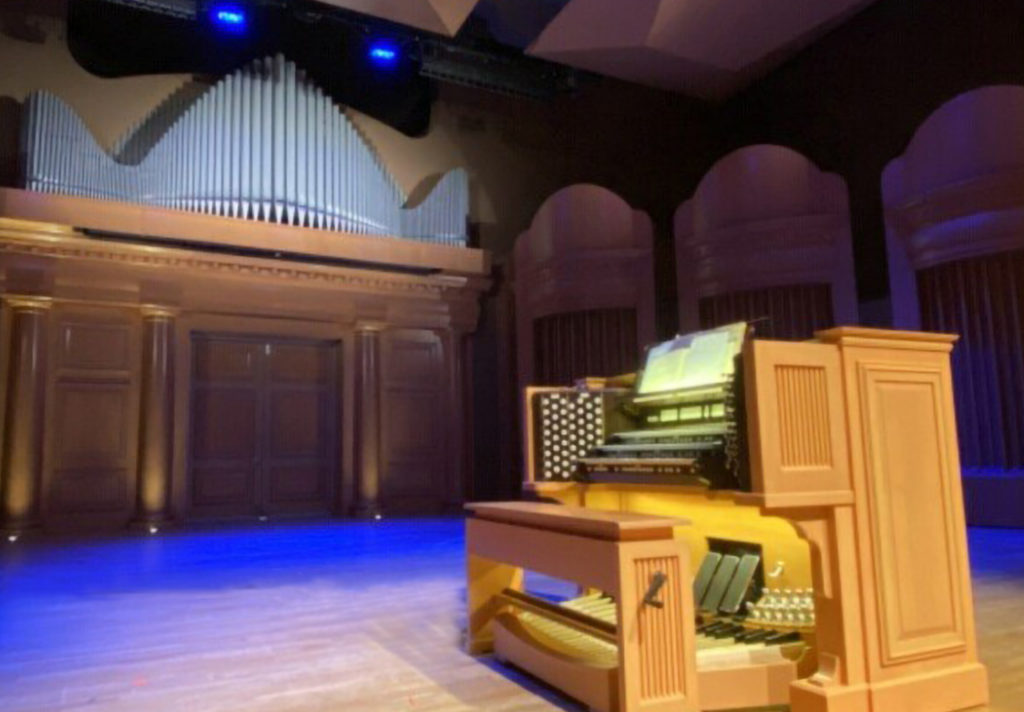 Have you been to the Falany Performing Arts Center (FPAC) recently? If so, you may have noticed something new in Flint Hall – the beautiful pipes of the FPAC’s organ rising above the stage. You may have even been lucky enough to attend one of the recent events where the new organ was featured, like the Christmas Concert or the inauguration of Mark A. Roberts, Ph.D., as Reinhardt’s 21st president. The organ, a gift from Dr. Austin and Bea Flint, was installed in fall 2021, and now we dedicate this melodious new addition to Flint Hall.

On March 15 at 7:30 p.m., join us for a special dedication concert – a free event, open to the public. No tickets are required.

“The organ was custom built for Flint Hall by R.A. Colby, Inc., one of the leading organ builders in the United States,” says Fred Tarrant, Ph.D., dean of Reinhardt’s school of performing arts. The Colby team constructed the instrument in their Tennessee factory. Tarrant describes the organ as a “hybrid instrument,” using both the pipes traditionally associated with organs and digital enhancements. The principal pipes are visible above the stage, and there are multiple speakers in the chamber behind the pipes. “While the pipes are responsible for the main sounds characteristic of most organs, the digital enhancements bring to life the orchestral tone colors tailored specifically to the acoustics of Flint Hall. The result is a glorious instrument with virtually unlimited sound possibilities.”

“Lovers of opera and classical pipe organ music, Dr. Flint and his wife Bea consider the Colby Organ one of their most precious gifts,” says Roberts. “When Flint Hall was originally built, it included space for a pipe organ that was never purchased. In a sense, there's always been something missing from Flint Hall-- that was a pipe organ. Through conversations with Professor of Music and Choir Director extraordinaire, Dr. Martha Shaw, beloved business professor Dr. Dana Hall, and with the encouragement of Dr. Fredrick Tarrant, Dr. Flint saw a need and was moved to fill it. With this extraordinary gift, all who visit Reinhardt will be blessed by the refulgent sounds of this custom-made pipe organ.”

Roberts describes Dr. Flint as “one of Reinhardt University's most engaged and benevolent members of the Board of Trustees.” Donations from the Flints have served to advance both the sciences and the performing arts. The Flints established a performing arts scholarship for aspiring pianists and contributed to the university's development of the performing arts. “The tunable auditorium at the Falany Performing Arts Center is named in his family's honor-- Flint Hall.”

Dr. Flint has worked directly with Reinhardt biology faculty and students on advanced experiments to bring back the American Chestnut tree, which became extinct in the early 20th century due to a blight from Asia. The Chestnut tree farm, managed by Reinhardt faculty and students, is located on Dr. Flint’s farm near campus. Dr. Flint also contributed to the cross-country running program by building the Jordan Turner Running Trail within Reinhardt's Appalachian Village Forest, providing a safe and natural environment for all to enjoy.

Dr. Flint, a retired radiologist, joined Reinhardt’s Board of Trustees in 2016. He and his wife, a former Reinhardt English professor, have played an active and supportive role in the Waleska community since 1969.