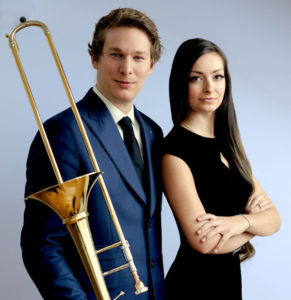 Trombonist Peter Steiner and pianist/organist Constanze Hochwartner will be taking the stage for free a concert at Falany Performing Arts Center in Flint Hall on Feb. 5.

The Duo Steiner-Hochwartner was formed in 2017 and they have spent the 2018-2019 season in extensive international travel, including a tour to the United States, Europe, Asia and South America.

Hochwartner started playing piano at a mere 3 years old and continued her education in piano, organ, and instrumental and vocal pedagogy. She has performed as a solo artist around the world, including organ concerts in Europe, the United States and South America.

Steiner and Hochwartner will lead a masterclass on Feb. 5 starting at 5:30 p.m. in the Galt Instrument Hall in Falany Performing Arts Center with a concert to follow in Flint Hall at 7:30 p.m. This event is free and open to the public. For more information about the Duo Steiner-Hochwartner, see www.steinerpeter.com.