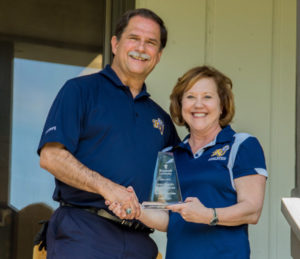 The Rev. David Melton has been involved with Reinhardt University’s United Methodist Golf Outing for nearly the 24 years it has been in play. The current committee chairman’s dedication and commitment to furthering higher education and the United Methodist Church teachings have earned him the 2016-2017 John Wesley Clergy Award.

“It is an honor and a privilege to be recognized with this award. I do what I do because I love to do it,” said Melton, of Dunwoody United Methodist Church. “All the folks I have been working with at Reinhardt and the committee members have been wonderful.”

“We are fortunate to have great friends at Reinhardt like Rev. David Melton, 2016-2017 John Wesley Clergy Award winner,” said Tim Norton, vice president for advancement and marketing at Reinhardt. “Not only has David served his church, Dunwoody United Methodist Church, for more than 20 years, he has served Reinhardt University with his strong support for our annual United Methodist Scholarship Golf Outing. Reinhardt students are the beneficiaries of David’s long, strong support, and we are ever grateful for his work on behalf of the University.”

Melton said he has long been a supporter of higher education, serving on his alma mater’s alumni board. Pfeiffer University awarded him the Outstanding Alumnus of the Year last year.

“My wife, Joy, and I believe in higher education and the church’s involvement,” he said. “Floyd Falany was the individual who got me involved at Reinhardt. I’ve enjoyed having the opportunity to help further the advancement of Reinhardt over the years. What is happening in Waleska is amazing.”

While prizes are given to teams that perform well, the United Methodist Golf Tournament is more of a low-key, relaxing day out. The early planning meetings 20 years ago were held over hotdogs and conversation, followed by a round of golf at a North Fulton golf course.

“It was a great way for the committee members to bond,” Melton said.

While Melton calls the planning for the event “a well-oiled machine,” he said anyone is welcome to serve on the committee, and new ideas are welcomed. Those interested in serving should contact Dale Morrissey, director of development and external relations for Reinhardt, at (770) 720-5506.

Melton is a Deacon in Full Connection in the North Georgia Conference of the United Methodist Church and is in his 22nd year on the clergy staff at Dunwoody United Methodist Church. Currently, he serves as the minister to the congregation, overseeing the areas of Adult Education, Evangelism, and Assimilation & Member Involvement. Before joining the staff at Dunwoody, Melton served at St. James UMC, Atlanta; St. Luke’s UMC, Windermere, Fla.; West End UMC, Nashville, Tenn.; Pfeiffer College, Assistant Director of Admissions, Misenheimer, N.C.; and Lake Junaluska Assembly, Lake Junaluska, N.C.

Rev. Melton is a 1976 graduate of Pfeiffer College (BA in Christian Education and Psychology) where he was president of his class and a 1982 graduate of Scarritt College (MA in Christian Education). He was commissioned as a Diaconal Minister in the Tennessee Annual Conference in 1982 and was ordained as a Deacon in Full Connection in the North Georgia Annual Conference in 1997.  David also has served on numerous committees, boards and agencies of the United Methodist Church, locally and nationally.  He serves as an elected member of the Pfeiffer University Alumni Board and served as co-president, with his wife, Joy, from 2007-2009.  Last year, he was named Outstanding Alumni.