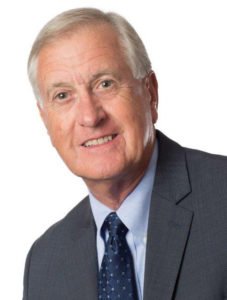 For John Bennett ‘65, there was no discussion about college choice. His parents and other relatives attended Reinhardt, and Bennett was not the last in his family lineage to enroll.

Lifelong residents of Cherokee County, Bennett’s family has lived in Salacoa Valley since 1846, farming, operating the last cotton gin in the county and running the still-standing Bennett Grocery Store during the Great Depression.

“Back in those days, roads were not paved, and it was extremely difficult to get out, so anything people needed, they bought at the old grocery store from shoes to clothes to groceries, to fertilizer to farming implements, coal, kerosene, fuel — things that you had to have,” said Bennett. “It was the Walmart of its day, out in the country.”

Items from that store now live at the Funk Heritage Center as part of the Bennett History Museum, a legacy to Bennett’s father, John Bennett Sr. and his wife, Ethel Bennett.

Bennett, Sr. ‘25 attended Reinhardt Academy. Following Bennett Jr., his children, including Angie Ulm, and three of his grandchildren attended Reinhardt as well, with his oldest grandson graduating from the criminal justice program and his youngest granddaughter pursuing business.

Education is an important aspect embedded in the Bennett family — Bennett Sr. maintained an interest in education throughout his life, serving on the Cherokee County Board of Education.

“Although my father wasn’t able to get a college education himself he had an interest in education,” said Bennett. “He was chairman of the Board for a number of years and was actually chairman of the Board when schools were integrated and was instrumental in seeing that there were no riots, no demonstrations and nothing bad happened.”

While attending Reinhardt College, Bennett worked on the family farm and continued his business management degree at the University of Georgia. After graduation, Bennett was unsure where his career would take him, having majored in business to keep his options broad.

He began his job search upon returning to Canton and having worked with poultry for his father’s independent business in the 1950s and 1960s, Bennett found a job.

“I talked to a poultry company on Thursday, went to work for them on Monday and worked there for 47 years,” he said.

Bennett worked with the people growing the chickens and producing the eggs, enjoying the opportunity to work with people. During his 47 years in poultry and in retirement, Bennett has held many leadership positions supporting Reinhardt. He has served as a member of the Board of Trustees for 15 years, chairman of the Cherokee Scholars committee and as the Alumni Association president.

His service and support of the University led to he and his wife, Joy, earning the John Wesley Laity Award in 2015.

“I was invited to become a member of the Board of Trustees and I’ve enjoyed my time serving there, getting to see all the great things that have happened at Reinhardt since I’ve been actively involved,” he said.

Bennett was impressed with those on the Board and became a trustee member to input ideas. He encourages alumni and classmates to become active on campus to change lives, shape the future of Reinhardt and see the dramatic changes.

“We’re really putting an emphasis on the Christian aspect of Reinhardt again, that’s one thing Dr. Mallard has made a real push to do, to re-establish our focus with working with the United Methodist Church and maintaining our strong ties to the Christian base and the things that make Reinhardt a special family and promoting the activities that give everyone the opportunity to become the best they can by attending Reinhardt.”