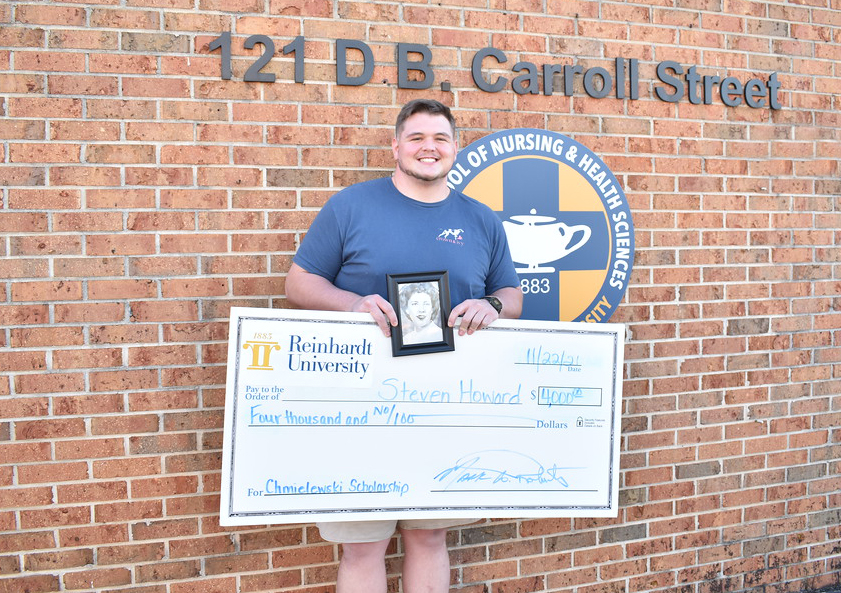 Thanksgiving 2021 proved to be the perfect time for a magnificent surprise – and nursing student, Steven Howard ’23, was the grateful recipient.  Just before the holiday break and unbeknownst to him, Steven was awarded a special gift for his pursuit of a nursing degree in Reinhardt’s Cauble School of Nursing. “I had no idea about the gift. My family and one classmate knew about it – and they did a very good job of keeping it from me,” says Howard. “I was in shock. I see this stuff in movies and on the news, but it never happens to me.”

The Lillian Hildegard Chmielewski RN Memorial Nursing Student Gift was presented to Howard by Diana Willis and Kim Chmielewski (Lillian’s daughters) and Karan Mason (Lillian’s daughter-in-law). Lillian, who passed away in October at the age of 93, was a nurse for nearly 70 years. According to Mason, Lillian “took tremendous pride in being a nurse” and was known for her exceptional patient care.

Howard said that he was drawn to nursing as a caregiver for his mother after she was diagnosed with small cell lung cancer in 2008. He was just 8 years old at the time. “Due to chemo and radiation therapy, she quickly lost her ability to walk and was confined to a wheelchair. I would push her around the store and load and unload the chair from the car. Taking care of my Mom made me realize how much I love caring for others.”

Howard’s mother passed away when he was 16 years old. “My mother and I were very close -- it was just the two of us, and I was her primary caregiver.” Howard says that nursing “makes me feel more connected to her since her passing.” With limited family assistance, Howard works diligently to support himself through school. “I work two nights during the weekend, while also using the weekend as time to study for the upcoming week and any exams.”

When Mason learned of Howard’s story, she immediately added more money to the gift. Then – the stuff of movies -- more than 40 family members and friends joined with contributions to equal $4,000.

“I am extremely thankful,” says Howard. “This is a huge blessing that will relieve a lot of stress. This gift means that I can take a little more time off from work to focus on the material that will help me be a better nurse to my future patients.”

“Steven is a wonderful young man who is very passionate about his nursing career,” added Dr. LeAnne Wilhite, Dean of the Cauble School of Nursing. “I think that Ms. Chmielewski would be very proud of Steven and what he will bring to the profession of nursing.”