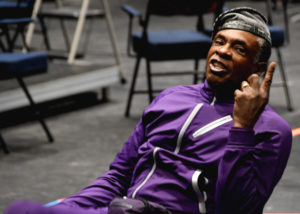 Emmy Award-winning and Tony Award-nominated Keith David spoke candidly with Reinhardt theatre students during a masterclass before his show at the Falany Performing Arts Center. Photo by Jordan Beach

Before Emmy Award-winning actor and musician Keith David performed his Nat King Cole tribute show at the Falany Performing Arts Center last Friday, he made a stop at the Reinhardt University Theater to engage in candid dialogue about the theater, television and movie industries.

“One story that stuck was how everyone is a part of the ensemble, and as a lead role, you set the atmosphere for everyone else,” said Jaffar. “The energy you give is where everyone else’s energy will be.”

Currently on break from his favorite role as “Bishop” in the Oprah Winfrey Network series “Greenleaf,” which recently was picked up for a fourth season, David is on tour with “Too Marvelous for Words: A Celebration of Nat King Cole.” He arrived early to Waleska to share the wisdom from his rich and varied career that includes roles in “Platoon,” “There’s Something About Mary” and “The Bible.”

“I hope I imparted the importance of studying and taking care of themselves,” said David. “It’s as important to nurture yourself as it is honing your craft…how you take care of yourself in between (jobs) will inform how well you do that.”

Jonathan Bynoe, also a musical theatre major, was impressed with the wisdom David brought to the class.

“His word of advice was candid, to maintain the ability to be humble and to always seek knowledge, it’s important with everything we do in our lives,” said Bynoe.

David also spoke on the relationship between training in school and existing as an actor in the world.

“There are some things that, if you were able to deal with it in your college life, it will be a breeze in the world — in the world, it’s harder to take because you tend to internalize that more,” said David. “It doesn’t mean that it’s anymore true, but it seems to have more consequences and it certainly can if you allow it.”