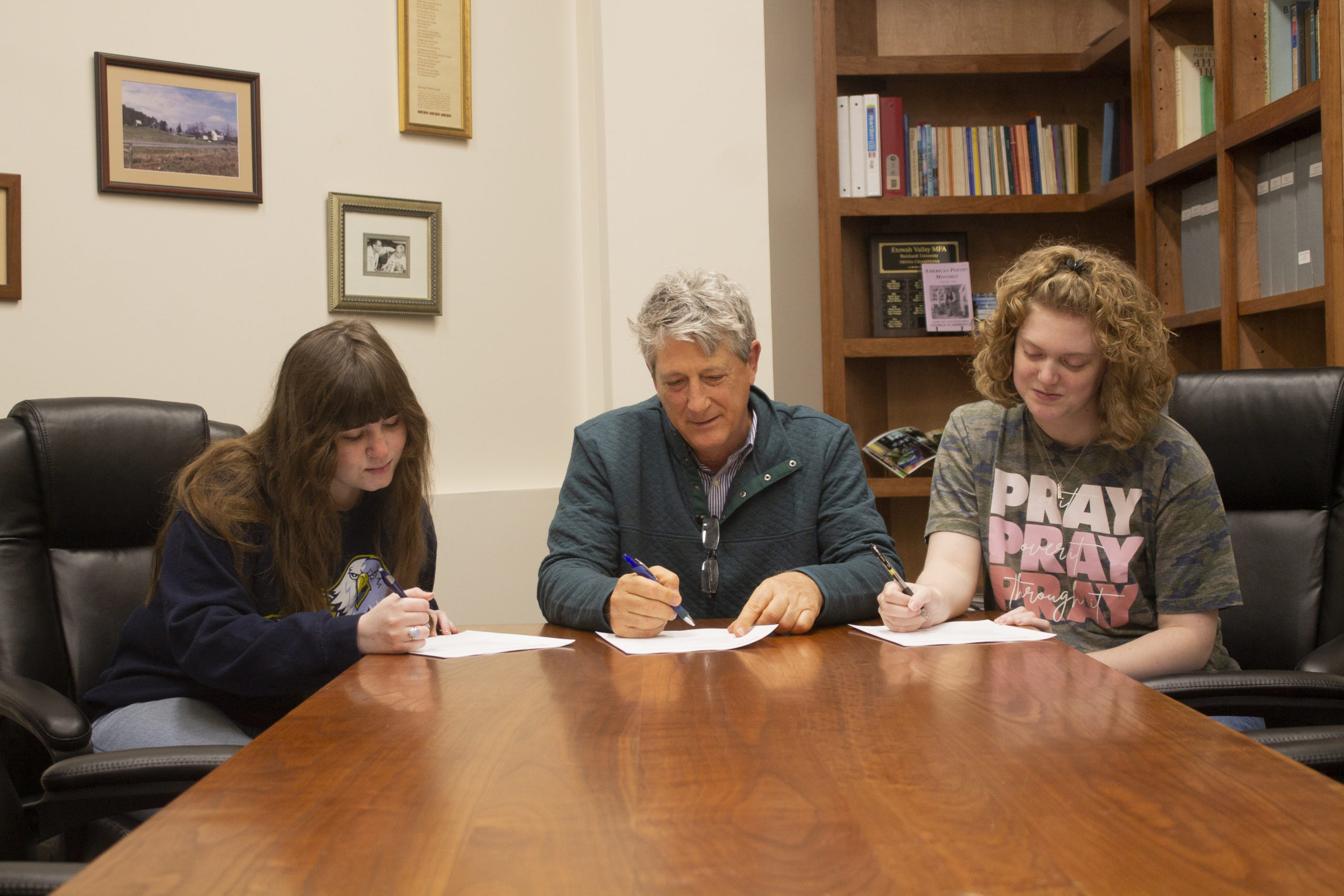 Senior Lauren Dose and junior Olivia Ruzicka may historically be the first Reinhardt students to ever land a book contract. The two English majors will embark on this exciting new journey under the leadership and guidance of Professor William Walsh. “This is an unprecedented and rare occurrence for an undergraduate student to accomplish such a remarkable feat,” says Walsh.

Olivia Ruzicka grew up in Paulding County, right outside of Atlanta. Most of her peers chose the same local university, so she never thought to explore any other collegiate options. “I was first introduced to Reinhardt at a college fair when I met their admissions representative. He introduced himself by talking about this book he was reading, and that just stuck out to me. Meanwhile at the other table of the school I initially wanted to go to, their representative just kept saying ‘If you want more information about us, please go to our website,’ and I was just like, then why are you even here! So that experience helped me decide to check out Reinhardt.”

After just one visit to the Reinhardt campus, Olivia knew it was the place for her. “The people are just so friendly. I love the size too because I feel more connected to my professors and classmates. I just really enjoy it here.” Ruzicka is now a Creative Writing major.

Lauren Dose grew up in Orlando, Florida, then attended high school in Jasper for some time before moving to Canton during her junior year. “I was really interested in doing the dual enrollment program and this was the nearest university. Then after a year of dual enrollment, I decided to come back here full-time because I fell in love with the environment, culture, and people.” Dose is now a senior English Literature major, set to graduate this spring.

The two met during one of Professor Walsh’s English classes, Literary Editing and Publishing. Walsh noticed the high skill level of both students as they worked Sanctuary, the Interdisciplinary Arts Magazine of Reinhardt University. The professor approached them initially to be editors for the Flannery O’Connor book he was set to write, but then decided to evolve their participation into something even more rewarding, allowing them to be co-writers.

The premise of the book will be about Andalusia - the farm that American novelist Flannery O’Connor lived on for a substantial portion of her life. In O’Connor’s stories, there are significant references to the farm and people who came to visit the farm. To create the book’s foundation, Olivia and Lauren will investigate O’Connor’s novels, short stories, and film adaptations, to draw parallels between her fiction and real life, with the farm as the focal point.

“We have three parts we’ll be focusing on,” Olivia explained. “Her life, the farm and the work that went on there (dairy farming), and then her literary works that reference the farm. She lived most of her life there. Even when she relocated to New York for her career, she decided to come back to the farm when she was diagnosed with lupus. The farm ended up being where most of her stories were written. So, it just makes you wonder, would all of her success have happened? Would we ever have all these stories if she had not moved back home?”

The students have signed an eighteen-month contract with publisher McFarland & Co. to complete the book. While they have expressed this experience will be daunting and require a lot of energy drinks, they are determined to work hard and be held accountable for their responsibilities. Lauren commented, “I’m just hoping I can hold up my end and produce something excellent.”

On what it has been like having professor Walsh as a mentor for this book, Olivia said, “He’s very enthusiastic and passionate. We went to Milledgeville in November for our preliminary introduction. When we were driving back at one in the morning, he was still talking the whole way! Lauren, Dr. Little and I were all looking at each other like ‘Please stop,’” she said jokingly.

Lauren followed up with, “Yeah, he doesn’t get tired! He wakes up at 5AM and then just ‘goes.’ It seems like he never loses steam. Which is intimidating at times, but also motivating.”

Each of their parents recently met with Walsh to review the contract, and go over the writing process and all of the intricacies. Olivia expanded, “Honestly, I was feeling hesitant over December break on whether I wanted to do this. Even though I already went to Milledgeville and agreed, I was just thinking, ‘What exactly am I doing this for?’— if that makes sense. But then I thought about how much of a wonderful opportunity this is in terms of our career and long-term goals. I said all of this to my dad, and then when he met Professor Walsh and understood he had our best interest in mind, he was really excited for us.”

Lauren was adamant that this journey is the catalyst to her successful career in the future. Post-graduation she plans to take a gap year to do an internship alongside other writing projects before she enrolls in graduate school. Olivia plans to work on fiction novels and eventually get into writing for films and video games.

The tentative title of the book is Andalusia: Flannery O'Connor and the Family Farm.