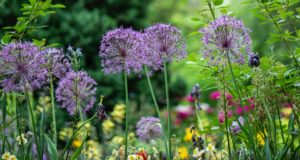 As stage manager, Nicholas Gwin has been keeping “The Secret Garden” production on schedule, providing practical and organizational support to the cast and crew. His job as lighting designer, however, has taken a deeper journey.

Gwin is a key member of the crew for the Reinhardt University Theatre Department’s production of “The Secret Garden,” Feb. 21-24 and March 1-3.

“The Secret Garden,” while described by Gwin as leaving the audience with “a lovely warm feeling,” delves into themes of grieving.

“As I asked myself how I viewed death, colors and patterns started forming, but no matter what it was I felt like I hit a brick wall,” said Gwin. “This show has revealed to me that not every design is easy.”

Through the process, Gwin found that hitting a brick wall promotes growth as he learned new perspectives.

“Each show is so specific, but what is important is how I view it and how I want the audience to feel about it.”

The role of Lily, the ghost of Colin’s mother, is portrayed by Rachel Hutto, who also saw the perspective on loss that this show presents.

“This show is a beautiful reminder that when someone passes away, those around them should not be stuck in the sadness of their loss but hold on to and remember the best of that person,” Hutto said.