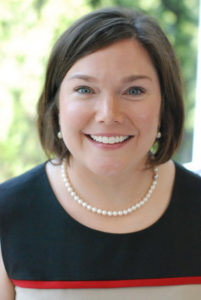 For nearly 15 years Julie Peppers has been making an impact on the lives of children in the Cherokee County School District. Peppers’ success as a student at Reinhardt and her servant heart has translated into a successful career in education.

Reinhardt and the Cherokee County School District are more than education and a paycheck for Peppers – they are in her blood. Her mother, Janice Prather, retired in 2007 from Cherokee County schools, and her father, Larry Prather, is the current defensive line assistant coach for the Reinhardt Eagles football team.

When Peppers graduated from Reinhardt in 2006, she began her teaching career in Cherokee County, the same county where she attended school growing up. She is now assistant principal at Sixes Elementary having previously served at Bascomb, Carmel, Hasty, Johnston and Knox elementary schools in Cherokee County.

“My years at Reinhardt provided me a great opportunity to establish lifelong friendships, as well as develop skills and confidence to help me be successful in my career,” said Peppers. “Small class sizes allowed for lots of interaction with other students and instructors to identify, discuss and sometimes debate critical education issues such as best practices, classroom management, student discipline and integrating technology in the classroom.”

“Any successful educator must have a passion to be a public servant. They should demonstrate a patient, calm and flexible personality. An educator must be willing to be a lifelong learner and truly believe that they can change the world one student at a time.”

Earlier this year, Peppers was named a “Top 10 in 10” exceptional young professional by the Cherokee County Chamber of Commerce.

Entering her 13th year as an educator, Peppers’ children are in kindergarten and second grade at Sixes Elementary. Her husband, Billy, is the City Manager for the City of Canton, and she enjoys spending time with her family and attending Reinhardt University football games.