After 43 years of serving Reinhardt University and its leadership, Bonnie DeBord will retire from her position as executive assistant to the president. 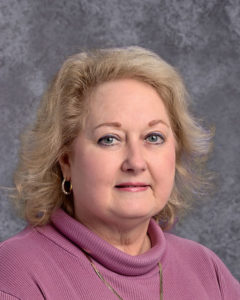 Throughout her time at Reinhardt, DeBord worked for seven presidents and, early in her career, worked with Dr. James Rowland Burgess during his time in the Development Office. After her first 12 years of working for both the academic dean and the president, the Lawson Academic Center was built, and the dean’s office moved and hired a separate assistant. With this change, DeBord retained her duties with the president’s office for the remainder of her time at Reinhardt.

Before coming to Reinhardt, DeBord lived in Waleska and traveled to Marietta to work for the McLaurin Corporation.

“That was way before I-575 came in the picture so I was having to travel old Highway 5. Gasoline was only about 30 cents a gallon, but I was spending one and a half hours drive each way,” said DeBord.

DeBord’s mother-in-law, who worked in the lunchroom at the old R.M. Moore Elementary School, heard of a staff opening at Reinhardt while at work. DeBord then called Dr. Floyd Falany, academic dean at the time, to arrange an interview. The position was narrowed down between DeBord and an older, more experienced woman.

“I was only 23 years old at the time, but being my outspoken self, I told him that just because she was older, didn’t mean she had more experience, and told him about some of my responsibilities at McLaurin. In any case, I got the job and am still here.”

The one aspect of her job that DeBord will miss the most is the people.

“Children of students I remember from years ago have now attended and graduated from Reinhardt. Some alums return to campus from time to time and usually drop by my office. They are amazed that I can actually remember some of them.”

DeBord’s favorite spot on campus is the gymnasium. What used to be Reinhardt’s student life center now hosts athletic events, in which DeBord has attended many games.

“My husband and I have watched many, many basketball games over the years, even traveling to some of the away games as well as the AAC tournaments in Kingsport, Tennessee.”

Dr. Mark Roberts, interim president, appreciated DeBord’s work ethic and attention to detail from the start of his time at Reinhardt.

“Bonnie Debord was probably my first contact with Reinhardt University after being hired by then President, Dr. Tom Isherwood,” said Roberts. “Bonnie, I recall, was so organized and efficient in ensuring that all of my needs were taken care of as I transitioned from Virginia to Waleska, Georgia. Not to my surprise, I learned very quickly that Bonnie was the nucleus of the President's Office. If I need to find a document from a Board meeting from 1943 for an obscure SACSCOC report, Bonnie could find it. Over the last seven years, I've thrown Bonnie some accreditation curve balls, but she always hit them out of the park. Suffice it to say, Bonnie Debord has been star player on the Reinhardt team. She will be greatly missed!”

After decades of dedicated service to Reinhardt University, DeBord looks forward to spending plenty of stress-free time during her retirement.

“I look forward to spending more time with my family, especially my grandchildren, and doing some traveling with Danny. We still plan to come back for the basketball and football games.”