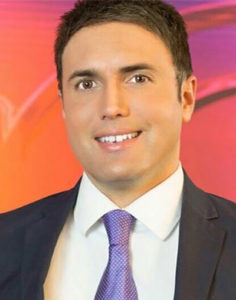 Cade Fowler ’07 is one of the recipients of Reinhardt University’s prestigious 10 Under 10 awards for 2017. He and other winners were recognized during Homecoming Weekend this month.

“The 10 Under 10 is an awards program we began to honor our alumni doing wonderful things in their 10 years since graduation,” said Tim Norton, vice president for advancement and marketing. “This year’s class is comprised of go-getters, philanthropists, and business and community leaders.”

Fowler earned a bachelor’s degree in Communication from Reinhardt. Two days after graduation, he began his career in TV news as a general assignment reporter for WALB News 10 in Albany. Cade currently serves as co-anchor WALB’s Today in Georgia. Cade also has anchored WALB News 10 at 7 on ABC and spent two years as a weekend anchor/producer.

In 2010, Cade was named Best Anchor/Reporter Class B Television by the Georgia Associated Press. His reporting has been recognized by the Georgia Commission on Family Violence and the South Georgia MADD campaign. He recently was nominated for an award for his wall-to-wall coverage of the deadly Americus Police Shootings.

Cade lives in Albany with his wife, Alli, and their Dachshund, Ellie.

The 10 Under 10 is a group of Reinhardt University Alumni who are active in many communities throughout the world. Each year, Reinhardt recognizes distinguished alumni who exemplify the mission of our institution. The 10 under 10 award is given to a group of alumni who graduated within the last 10 years and are successful in business, the military, nonprofits, government, ministry and/or the arts. Their pictures hang in the Student Center as a reminder of how Reinhardt alumni make a difference.