The Falany Performing Arts Center at Reinhardt University received another donation for the Center’s Founder’s Club Endowed Fund, this one given in memory of the late Jacqueline “Jackie” Hill by members of the women’s Bible study program that she established at Canton First United Methodist Church. 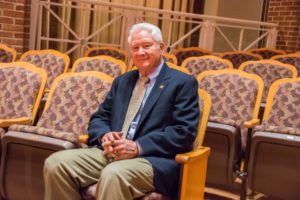 During the ceremony held March 22 in the Ken White Atrium of the FPAC, members of Mrs. Hill’s Bible study spoke about her, as did Reinhardt University President Dr. Kina S. Mallard.

“Scripture tells us to encourage, as we’ve heard spoken of here today. It also tells us to labor together. Thank you to the Jackie’s Bible study class for organizing this today, a true labor of love,” Mallard said.

Turning her focus to Mrs. Hill’s husband, the Rev. Dr. C.R. Hill, Reinhardt’s interim minister to students and senior pastor emeritus at Canton First United Methodist Church, she said, “Thank you, friend, for all you do for us.”

After the success of the first class, she continued organizing groups, securing teachers and leaders, “all quietly and effectively.”

“I feel that this memorial is a fitting tribute to a beautiful and generous soul who enhanced the role of women in our church,” Rowe said. “We know that the more we study and absorb the Word of God, the more we are led to witness and serve.”

Dr. Hill expressed appreciation on behalf of all of the family for the remembrance of his wife, noting that the chair in Flint Hall designated with her name was where he and Mrs. Hill sat for the many performances they had attended over the years. Trying to speak through tears, Dr. Hill simply said, “Thank you.”

“The Falany Performing Arts Center is a community treasure that is focused on providing first-rate performances in the Cherokee County community and beyond,” said Jessica Akers, director of the FPAC. “With a mission to keep arts education alive not only on the collegiate level but playing a part in K-12 education, supporting the FPAC endowment helps keep live performances on stage for all to see.  We are grateful for those who invest in this fabulous facility and our growing program offerings.”

The first chair dedication at the FPAC was in 2005. Now 32 of the 350 seats in the concert hall – Flint Hall – have been dedicated to an individual.

For more information about the Falany Performing Arts Center, visit FPAC.Reinhardt.edu.  To make a gift to the FPAC endowment or to dedicate a seat in Flint Hall, contact Reinhardt’s Office of Advancement at (770) 720-5621.