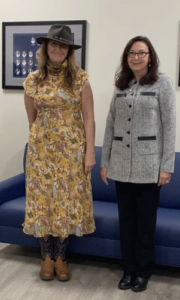 Reinhardt University’s Cauble School of Nursing & Health Sciences recently received a generous donation in the form of history and financial contribution to an aspiring nursing student, all in honor of the late Inez Arnold Kennemore.

Kennemore graduated from Reinhardt College’s high school division in 1954. She went on to earn her bachelor’s and master's degrees in nursing, starting her nursing career as a professor and later transitioning to working in hospitals, where she worked her way from floor nurse to director of nursing. In 1986, Kennemore became Nursing Vice President in Greenwood, South Carolina. When she wanted to impact nursing care on a larger scale, Kennemore joined the Joint Commission to travel the world as a hospital surveyor.

Ina Richards and Vivian Gettys, Kennemore’s daughters, visited the Cauble School’s campus in Jasper to deliver a Reinhardt memorabilia collage, along with a donation in their mother’s name to support a deserving student nurse studying at Reinhardt University.

“The Cauble School of Nursing & Health Sciences was honored by the donation made in honor of Inez Arnold by her daughters,” said Dr. LeAnne Wilhite, dean of the Cauble School. “Ms. Arnold’s rich nursing history is all the more inspiring because it started with her time at Reinhardt. The beautiful memorabilia detailing her career will be hung at  the Jasper campus to remind us all that nursing is as much an art as it is a science. We are humbled by this generous gift.”

Dr. John and Sara Jo Cauble, along with daughter Sally Forest, joined Wilhite to receive the gift from Richards and Gettys. Dr. Mark A. Roberts, interim president, was also in attendance, as well as Dr. Rick Townsend, Pickens County superintendent; Board of Trustees Ken White, Phil Landrum, John Bennett and Buddy Turner; and several of the president’s Cabinet members.