What started as a class project for communications students Alex Lee ’19 and Mason Smith ’20 evolved into a documentary film and love for the documentary filmmaking process. 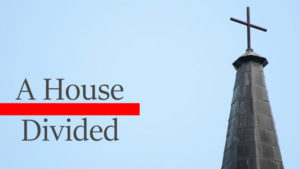 In Dr. Pam Wilson’s TV and Film Studies course, Lee and Smith worked on a group project to create a short documentary. By the end of the course, the two discovered an interest in exploring documentary filmmaking beyond the project.

Both Lee and Smith hold strong ties with the United Methodist Church and decided to produce a documentary film for their senior thesis class that objectively highlighted the current events of their denomination.

“The United Methodist Church has played a large role in my values and ethics,” said Lee. “When they started going through significant troubles, I wanted to create documentation of what was happening.”

While navigating the church’s discussions and decisions, the documentary focuses on the main question of whether or not the Methodist faith could remain “United.”
Throughout the process, Lee learned what it took to create a documentary.

“I’ve learned more about the type of work ethic surrounding the creation of a large-scale project, especially when working on a limited or no budget,” Lee said. “It really requires a lot of personal time, and financial and emotional investment.”

When budget became a question, Smith and Lee turned to the Center for Innovative Teaching and Engaged Learning (CITEL) to cover the cost of filming equipment and travel expenses for film festivals such as the Rome International Film Festival and the Oakwood Film Festival, where the pair plans to submit their film.

“We are very thankful for the Center’s assistance in this journey,” said Smith. “Because of CITEL, we can create and distribute a professional-level documentary.”

“The documentary has taught me so many lessons,” said Smith. “On the technical side, I became familiar with Adobe Premiere and Audition, while also learning framing techniques and camera and audio set-ups. On the professional side, I learned how to schedule meetings and times with multiple people as far south as Peachtree City and as far west as Rome. I learned how to represent myself as a professional outside of a college atmosphere, which has given me a lot of confidence as I begin searching for jobs.”

Lee views the project as a start to his career in the communications field.

“With this film, I hope to move further along in the communication field by testing the waters of my skill in creating independent projects like this,” Lee said. “Further, I hope this can start to put our names out there to be seen.”