By Jordan Beach
On Thursday afternoon, Reinhardt alumnus and Board of Trustee William G. Hasty, Jr. received the 45th First Citizen of Cherokee County Award from the Cherokee Chamber of Commerce at its Annual Meeting.

The First Citizen of Cherokee County Award is a prestigious title given to a Cherokee County resident who has lived in the county at least five years and has shown significant meritorious service to the community through family, civic and/or religious involvement. 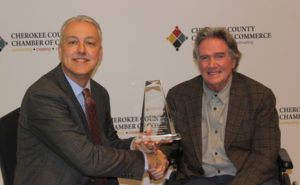 “He has made an indelible impact on Cherokee County and Reinhardt University. As chairman of the Reinhardt Board of Trustees, he played an instrumental role in Reinhardt achieving university status, the establishment of our football program and the creation of the Cauble School of Nursing & Health Sciences,” said President Kina Mallard.

As former Chairman of Reinhardt’s Board of Trustees, Hasty continued investing in his alma mater after graduating with an associate degree from Reinhardt in 1967, as is his nature to serve his community, shown in the way he dedicated his life’s work in Cherokee County through a variety of outlets.

"I know he's been very active in Cherokee County for many years. As a graduate of Reinhardt, we've been very proud of him," said Ken White, Chair of Reinhardt's Board of Trustees. "Billy was a very passionate chairman of our board for about 12 years and did a great job of leading the board. He is a very patriotic and loyal alumnus of Reinhardt. He is respected and admired by all the board members. He's a great listener and strategist for the college and serves the Board faithfully."

The Canton native went on to serve in the United States Army and started practicing law in 1974. Hasty currently counsels his private practice law firm, Hasty Pope, LLC. Throughout his career, Hasty represented and litigated for municipal and county government entities in Cherokee County.

Hasty also invested in his community by serving on several boards, including the Board of Directors for Northside Hospital Healthcare System of Atlanta, Inc. and is Chairman of the Cherokee County Hospital Authority. He served as the first Chairman of the Cherokee County Education Foundation and Gov. Nathan Deal appointed Hasty to the University System of Georgia Board of Regents Foundation in 2015. He continues to serve as a member of the Veterans of Foreign Wars, the Atlanta Civil War Round Table, the Atlanta Historical Society and the Cherokee County Historical Society, to name a few.