Public service is a key building block of a successful community. Good hearts and great skills, coupled with strong leadership, create a solid foundation for future leaders to build upon.

JoEllen Wilson is one of the strong leaders who Reinhardt invested in and is credited as being one of the building blocks on which Reinhardt’s current leadership stands. The Bartow County native came to Reinhardt as a student in 1959, graduating with her degree in liberal arts two years later.

Reinhardt quickly found a place in her heart, and she would spend 30 years pouring herself into the future of the University in roles fostering alumni relationships, transitioning university presidents into their roles, working in student affairs and fundraising for the University as the vice president for advancement. 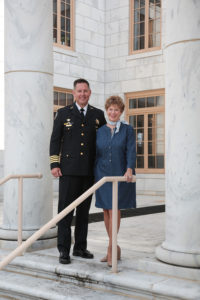 Outside of Reinhardt, Wilson found herself volunteering for many organizations and providing support in the community.

Her appointment to the Canton City Council more than 20 years ago was happenstance, following her neighbor’s passing. The Mayor and Council chose her to fill his seat.

“I soon found a passion for helping my constituents, who are my neighbors,” Wilson said.

Wilson spent the next 20 years learning, asking questions and most importantly, listening, many of the tasks she thinks are important components of making decisions for the city.

“I do not like controversy but find myself involved in zoning disputes and policy modifications almost weekly. This requires studying many different opinions and aspects, listening carefully, reviewing documents and finally, making a decision. Always, there are those who oppose a decision. I try to defer on the side of what is best and right for the majority of citizens.”

She understands the cause and effect relationship of what the decisions of the governing body have on the community, and she encourages those seeking to get involved in public service to truly understand that what they do or decide has an impact outside council chambers.

“Anyone aspiring to public service must realize their work affects everyone in some way. Making such significant decisions requires knowledge and good common sense,” she said. “There is great responsibility on the shoulders of each person elected to office. The job does not assure you can please everyone. It means you must think ahead, while reflecting on the past. It means learning everything possible about an issue in order to make a decision reflecting future reality. It means listening to new ideas and hearing from citizens who have prior knowledge. It means being informed and knowing the proper manner in which to use information.

“In short, public service requires making decisions that are best for the present and the future.”

Reinhardt alumnus Frank Reynolds ’95, ’10 was called to serve in a way that requires him to put his life on the line. The Sheriff of Cherokee County may have earned a fine arts degree from Reinhardt, but it was his calling that led him to a career in public safety.

“I don’t think I pursued a career in public service, rather, I think it pursued me,” he said.

Reynolds came to Reinhardt in 1989 to pursue a liberal arts degree. He stayed for a few semesters before leaving to work full time, only to return to earn his associate’s degree in 1996 and then complete his bachelor’s degree in 2010.

The need to work full time forced Reynolds to take breaks from classes but the backing he received from Reinhardt faculty helped him finish what he started.

The late Curtis Chapman, who taught art at Reinhardt, was a beacon of support for the sheriff. “He was very encouraging to me to finish my associate’s and then to pursue a bachelor’s degree.

“Curtis was a Reinhardt icon and still lives in the hearts of alumni,” Reynolds said.

Even though his degrees are unrelated to his career, he said his Reinhardt degrees have opened doors that he does not believe otherwise would have been an option.

“My major was not specific to my profession, but having my degree allowed me to have job opportunities that I would not have had otherwise,” he said. “I was once an apprentice. Reinhardt was my tool box, its curriculum my tools, and its professors my blueprint. Now, I am the master craftsman.”

Reynolds began his career in law enforcement in 1994 with the Cherokee Sheriff’s Office, serving for 11 years before working for the Department of State. When he returned from duties overseas, Reynolds went to work at the Pickens County Sheriff’s Office. He served in a leadership role as captain, and in 2016, he ran for election for Cherokee Sheriff.

“As a Georgia Constitutional Officer, the sheriff is responsible for maintaining and operating the jail, courthouse security, issuance of warrants and general law enforcement services,” Reynolds said.

To succeed as a leader, a strong support system is necessary. Both Wilson and Reynolds have had cheerleaders on their sidelines encouraging them every step of the way.

For Wilson, her husband, John, whom she met at Reinhardt, has been by her side through her service to Reinhardt and the community. In the political arena, Wilson said one of her greatest cheerleaders and mentors was former Canton Mayor Cecil Pruett.

“One of the many mentors guiding my life in service on Canton City Council was Mayor Cecil Pruett. As a selfless, tireless and compassionate individual with great vision, he not only inspired me, but many others while serving as Canton’s mayor,” Wilson said.

For Reynolds, his wife, Dr. Jennifer Reynolds, whom he also met at Reinhardt and a strong community leader herself, is the backbone of his support system. He says he is fortunate to have many professional and personal connections to lean on when he needs good advice or an ear to vent.

“I believe I am the person I am due to the people that I have surrounded myself with personally and professionally. I like to find admirable qualities in all people and then emulate their successes. But if I were to choose anyone, I would say my parents, Roy and Eileen Reynolds.”