After Angel Cornista '19 played volleyball for seven years, playing at the collegiate level became one of her goals. When looking at colleges, along with the volleyball program, Cornista was sold on Reinhardt’s small class sizes because she felt professors had the opportunity to provide students with their full attention. That was just the beginning of what she would learn to love about her alma mater.

Starting out, the natural challenges of becoming a student-athlete arose as she adapted to her new surroundings, professors, friends and teammates. It didn’t take long for her team to feel like family.

“Just like any business, family or team sport, working with a team has downfalls. However, my teammates became my second family. As a team, we faced adversity head on, made amazing memories and lifelong best friends,” said Cornista.

The time and energy Cornista devoted to her athletic ability is one she said she’ll never regret. She loved playing on a team that supported one another on and off the court—and the field, during her year of lacrosse. 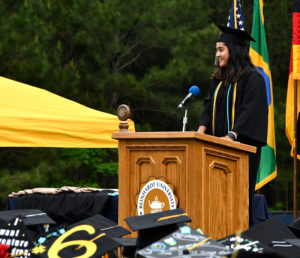 “Playing with a team in any sport allows an individual to learn how to work with others. This is when ‘I’ becomes ‘we,’ where ‘one’ stands for ‘all,’ and communication ties into the small real world.”

The volleyball team’s strong mentality certainly reflected throughout Cornista’s time as an Eagle: the ladies won the Appalachian Athletic Conference Championship (AAC) back to back in 2017 and 2018, and head coach, Brian Goodhind, won AAC Coach of the Year the same years. While she’ll always remember the wins, the lessons Cornista learned at Reinhardt will continue to resonate throughout her life.

“Playing volleyball, I personally learned to overcome adversity, to stand tall after a loss, to have a goal and fight to accomplish that goal. Playing a sport in college helped me grow, mentally and physically.”

Cornista’s coaches instilled values that also go beyond practices and games. During her first two years under Coach Jennifer Kandt, Cornista learned what it means to give back to the community. That mindset continued with Goodhind.

“He amplified the volleyball program with his knowledge, faith and community service.”

With the heart of her team and coaches, Cornista’s experience developed into an unexpected one.

“What I expected as a student-athlete ended up being 10 times better.”

Cornista’s Reinhardt experience took place outside the court and classroom, as well. She led new students as an orientation leader in 2018-2019 and coordinated social media for D.R.E.A.M.S., a student organization that promotes diversity on campus. While she may have not been a student leader for four years, the commitment she made proved enough to earn the Student Leader of the Year recognition her senior year.

“My Reinhardt involvement was brief and all though I was not on every organization, team or club, I found that whatever you invest in with all your worth, you will get out what you put in.”

With all her involvement, Cornista remained a dedicated student, earning her Bachelor of Science in sport administration and minor in graphic design. Her hard work resulted in representing the Class of 2019 at the spring commencement ceremony.

“Not only did Reinhardt itself help me grow, but the students, professors, faculty and staff, all helped me grow. I made amazing mentors that helped me understand my full worth and what I want to do in life but also what I am meant to do.”

Cornista’s Reinhardt journey is not over yet—shortly following graduation she was hired as the coordinator of athletic operations for Reinhardt's athletic department. She feels the time she’s already spent at the University provided her with the tools she needed to get to where she is now.

“Reinhardt University offers many tools to help students thrive academically, the only question is, how will you use them?”