Students who receive the Dr. Kevin Crawford Scholarship carry on the legacy of an academic whose passion for theatre was only surpassed by his love for teaching. 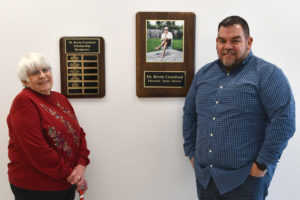 Following the annual scholarship luncheon, theatre director Dave Nisbet began giving Barbara and Todd Crawford a tour of Reinhardt University Theater. Around the corner from the front lobby they saw for the first time the newly installed plaques honoring their son and brother, the late Dr. Kevin Crawford.

“Kevin was one of the original founders of the theatre program, so he’s got to be honored in a way because he helped the theater building come to fruition,” said Nisbet. “If he hadn’t started the program, this building wouldn’t exist. He was very influential to students, they all loved him. I felt that we had to keep his name alive for other students to recognize who he is.”

Crawford came to Reinhardt University in 2007 to teach English and theatre, and he became heavily involved in the theatre program as an avid participant in the art form throughout his life. He is credited with writing the entire theatre curriculum. Growing up, Crawford took on many lead roles, but in his early 20s, he realized where his heart truly wanted to be.

“As he got older, I think it meant more to him to be more of the teacher, the inspirer, the director than to be the actor,” said Todd Crawford. “When he was younger, he loved being the actor. For years and years and years, he directed and played the lead roles in Shakespeare festivals in Florida, but once he got to a certain age—probably right around 20, 21—I think there was a part of him internally that it meant more to him to be the director and the teacher than it did to be the actor.”

“Even when he got to his first year of college, the college couldn’t believe he wasn’t majoring in drama,” Barbara Crawford added. “He was majoring in English. He had no desire to major in drama.”

Being the academic he was, immersed in English and theatre, Crawford was known for his knowledge of Shakespeare.

“I always knew that you never got into an argument about Shakespeare with Kevin because he would wipe the floor with you,” Nisbet said.

Standing in the building that Crawford’s contributions to Reinhardt’s theatre program helped to build, a wave of emotions came over his brother when looking at his picture on the plaque.

“It’s an amazing honor. Just knowing that theatre was his entire life, how much he loved inspiring people, teaching what he was taught from a very, very young age, being able to share that knowledge—it's an honor.”