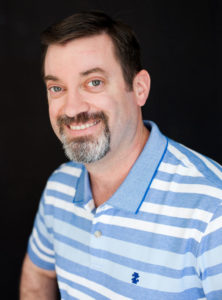 Walking into their first college course at 8 a.m. Monday morning can be a moment of nerves, apprehension and uncertainty for freshmen, but for Dr. Mason Conklin, it is his favorite part about teaching at Reinhardt.

“I love shaping expectations and dispelling some of the fears that an incoming freshman might have,” said Conklin. “I am honored to work with such talented students and to see them grow and develop in their four short years here.”

Conklin began his journey at Reinhardt as an adjunct music theory professor in 2012, teaching a couple sections of piano. Two years later he acquired a full-time course load as an adjunct and was given a contract to pursue a tenure track position the following year.

Conklin believes that part of what makes for successful teaching is having in mind the mistakes students will make. He describes his instructional style as having “a good deal of performance,” which he attributes to his high school acting career.

“You never know what Dr. Conklin is going to do next, and that suspense keeps students engaged,” said the assistant professor of music. “It also makes the subject material more memorable.”

Independence is a philosophy Conklin not only carries in his life, as seen through his practice of studying permaculture and growing his own food and medicinal herbs at home with his wife, it is a virtue he hopes to instill in those learning from him.

“I want my students to walk away feeling more independent about their musical endeavors. I hope that they leave with the knowledge of how to create musical products, and if not, at least know what avenues of further study will help them.”

Conklin views the School of Performing Arts (SoPA) as a program with many opportunities that benefits students enrolled in the program and those experiencing the performances, saying the free collegiate performances are worth much more than credit for the music appreciation course.

Since moving to Georgia, Conklin enjoys Reinhardt for several reasons after teaching at Iowa State University for four years.

“They never cancelled class for snow. They only cancelled class if it was so cold, there was a danger that children waiting at the bus stop would freeze their faces off. No exaggeration. At -30 windchills there is extreme frostbite danger. In the Spring, when the temperatures finally climbed above freezing, it felt like shorts weather. We moved. It was a good decision,” Conklin said.