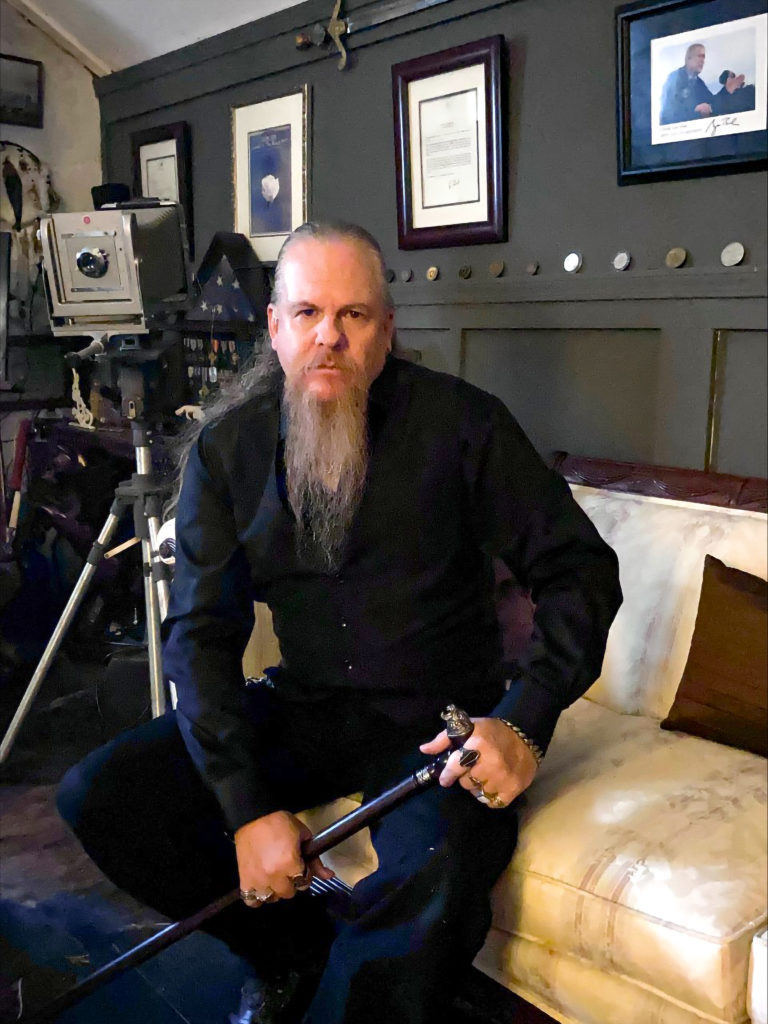 After 16 years of active duty in the Navy, followed by a successful corporate career, Scott Wade decided it was time for change. “My move from California to Georgia offered a time to reinvent myself. Art had been in the background of my life for many years, and Reinhardt provided an opportunity for me to learn the fundamentals of art.”

Although he had taken art classes in the past, Wade was seeking more. “I never truly liked what I did, even though I had exhibited my work. Going back to school was a great way to discover why I was not appreciating my own work.” So, Wade enrolled at Reinhardt as a Studio Art major.

Wade credits Brett Mullinix, assistant professor of art, as the “inspiration for the revitalization of my art.” He says Mullinix helped him learn some patience and that “has changed the way I produced artwork. I have improved by leaps and bounds because of what I have learned here.” But Wade’s story doesn’t end there.

Wade’s journey at Reinhardt took an unexpected twist. “I took creative writing with Dr. (Donna) Little. While writing my memoirs, I heard how much this class improved one’s ability to tell stories.” Wade wrote about his years in the Navy, serving in Desert Storm and Iraq, the former Yugoslavia, Croatia, and Somalia. “Dr. Little was so encouraging – I loved every bit of those classes.” In fact, Wade loved it so much that he added a minor – creative writing!

Wade also decided to experiment with travel writing. With encouragement from Bill Walsh, assistant professor of English, Wade wrote about this first leisure cruise, which was the first time he was on a boat since his work on an aircraft carrier. “I had a completely different perspective than most people. I would get deployed on a ship and it was just work - seven months at sea, 18-hour days, no weekends, no holidays, no birthdays.” Much to Wade’s surprise, “Travel Magazine Weekly” was interested in his perspective. “During my first leisure cruise I made observations of how disabled individuals were treated (Wade is service-connected disabled). I authored a thousand-word article about my own feelings, observations, and conversations with others. And they actually paid me for it – my first time out!”

Wade says this past year has been a revelation. “I thought that art would be the next best step for me, but I am finding that creative writing may be more enjoyable. It’s a new avenue I never thought existed until I started exploring different course options.”

Wade appreciates his place in the Reinhart community, both for what he receives as a student and what he contributes to campus life. He enjoys sharing his life experiences, the conversations that transpire, and the encouragement he shares with fellow students. “The professors understand that I have been around. I have had five good lifetimes through my military experience and lived all over the world. I’ve met Pope John Paul, the Queen and most of the royal family, and I have met and received letters from four presidents. I was also stationed in London for 4 years. I don’t think I am special because of this – anyone can have these experiences. I am no different than other Reinhardt students. If your real-world experience is not fulfilling, you can always reinvent yourself and do something else!”