One hundred and seventy-eight years after the Cherokee Nation was removed from their ancestral homeland in Cherokee County, and 20 years in the making, Reinhardt University’s Funk Heritage Center (FHC), located in Waleska, Ga., hosted an open house and ribbon cutting on Sept. 29 for two new exhibits at the FHC: Life Along the Etowah and History Beneath Our Feet.

Life Along the Etowah focuses on the environmental aspects of the area and Diane Minick, executive director of the Upper Etowah River Alliance, played an instrumental role in putting the exhibit together. History Beneath Our Feet focuses on the artifacts and archeological aspects of the full exhibit. These two exhibits in the Hall of Ancients are the first phase of the project. Another exhibit on the Cherokee is expected to be completed in the next year-and-a-half.

“It has been nearly 20 years since the recovery of the Hickory Log artifacts began. Excavation of the Canton Walmart site yielded thousands of artifacts, some more than 2,000 years old,” Dr. Joseph Kitchens, Executive Director of the Center, said. “Raising over $50,000 for the curation and another $100,000 for the exhibition of some of these artifacts, has consumed the museum staff’s efforts for the past five years. Volunteers, donors and members have made it
possible to recover evidence of Cherokee County’s past. We have now completed the first exhibits featuring this material, with another to follow in 2018 focused on the Cherokee period of occupation of the site.”

Donations included an up to $50,000 matching grant from the Scott Hudgens Foundation, as well as from other generous donors.

“They have dreamed and planned and raised money,” said Reinhardt President Dr. Kina Mallard. “Anything we can do to enhance this treasure for Reinhardt for Waleska – we thank those who have contributed toward this vision.”

The story behind the creation of these exhibits began in 1995 when the Walmart store on Riverstone Parkway was being developed. 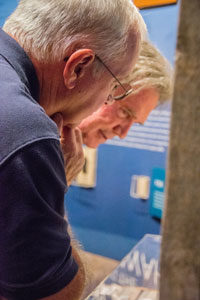 “Imagine discovering an item in the dirt that dated from the time of Christ, a 2,000 year-old stone artifact connected to people who lived in the Canton area long before Europeans ‘discovered’ the Americas,” Kitchens said. “Well, that is what happened when the new Walmart Store was built. Archaeologists unearthed thousands of artifacts and biological samples. These were processed by the principle archaeologist, Paul Webb, and with his encouragement the Funk Heritage Center has raised the money to preserve these artifacts. Staff from the University of Georgia’s Laboratory of Archaeology have worked with us to interpret the collection and prepare it for the exhibition here on the Reinhardt University campus.”

Webb said, at the time, it was the hottest, driest summer he could remember, and the crews worked tirelessly to excavate the artifacts while construction of the site was put on hold.

“We prepared a plan that was accepted by the state and our crew of about 30 worked through the summer of 1995, right up until Labor Day. The conditions were challenging. We worked six-day weeks in 90-degree weather. Once excavation actually began, crews uncovered not only artifacts from the before the Cherokees were removed in 1838, but also some from the Mississippian, Woodland and Archaic periods of time.”

Reinhardt became involved with the project five years ago. It was a chance lunch between Billy Hasty, Reinhardt’s Board of Trustees Chairman, and Kitchens that led the charge. Hasty told those in attendance at the ribbon cutting event that bringing the exhibit to fruition was a labor of love and dedication. Hasty said they recalled the archeologist’s name during that lunch and within days they had located him. A group of interested parties took a trip to North Carolina and went through the collection.

“We found them and looked at them and then we started moving forward,” Hasty said. “This a day I wondered if it would ever materialize … Joe, hat’s off to you, you just continued. We wondered how we would go forward. It is such an honor of how proud I am that we have this at Reinhardt.”

Martha Hout, program coordinator for the Funk Heritage Center, said the artifacts found during the dig would remain under the care of the University of Georgia Laboratory of Archeology in perpetuity.

“I don’t know of a bigger, better project done by a small community in Georgia,” said Dr. Mark Williams, director of Georgia Archeological Site Files and the Laboratory of Archaeology. “This is one of the best uses I have seen of some of those 12,000 boxes of artifacts that we are curating. Yes, they are for researchers, undergraduate and graduate students … but that’s not reaching the public in the way we also want to do. This is the way we reach the public. We will be taking good care of the Hickory Log artifacts forever.” 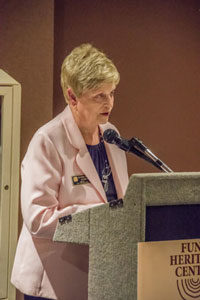 The Heritage Center is open during regular museum hours, Tuesday through Friday, 9 a.m. to 4 p.m., Saturday, 10 a.m. to 5 p.m., and Sunday 1 p.m. to 5 p.m. Admission is $6. Discounted rates for seniors and children are $5.50 and $4, respectively. Active duty military always are free. Reinhardt students, faculty and staff also can view the museum for free with their University ID.

“We have selected some of the best artifacts to be displayed for the exhibitions,” Hout said. “I encourage people to visit us and learn how people in this area lived long ago.”

For more information about the Funk Heritage Museum, visitation and tour information, visit www.reinhardt.edu/funkheritage or call (770) 720-5970. The Funk Heritage Center has seen more than 160,000 visitors and is a National Parks Service Trail of Tears Interpretive Site.

PHOTO CAPTIONS (from top), All photos by Jeff Reed

Billy Hasty and Skip Spears examine some of the artifacts at the exhibit.

Waleska Mayor Doris Jones welcomes everyone to Waleska and said she is delighted to have the Funk Heritage Center and its new exhibit in the city.