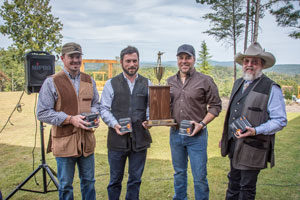 “I could not be more proud of the turnout,” said Jeffrey Pourchier, director of advancement for athletics, who was led the charge in planning the event. “We had almost 20 four-person teams and great sponsor support, and we are ready to get started planning the second annual event.”

The Clay Shooting Classic was held Oct. 14 at Garland Mountain Sporting Clays in Waleska. The first of its kind a Reinhardt, the tournament was set up like a golf tournament but with clay shooting instead. Garland Mountain Sporting Clays, located just a few miles from Reinhardt’s main campus, opened earlier this year and once taking a look at the facility, Pourchier said they knew they had to get an event planned.

“Garland Mountain Sporting Clays is an amazing facility located so close to campus,” Pourchier said. “It was a perfect fit for our event needs, and we are appreciative of their service and hospitality.”