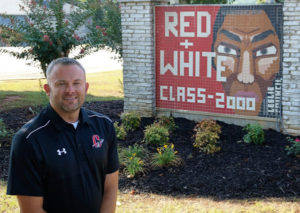 Jeremy Adams ’04 is living his dream in education in his Road #AfterReinhardt.

When starting his career at Reinhardt, Jeremy Adams ‘04 walked onto the basketball team. His sophomore year, Adams gave up his jersey for a whistle to begin his coaching career at a local high school.

Becoming a graduate assistant at Sequoyah High School his second year at Reinhardt proved beneficial. Not only did he become head basketball coach at Sequoyah at age 25, he is currently athletic director and assistant principal at Cherokee High School. And, just recently, Adams was named Region 4-7A Athletic Director of the Year.

With this honor, Adams is in the running for a state recognition. This is not his first award, however, he was named Region Coach of the Year in 2011 and 2013 and earned Atlanta Metro Coach of the Year when he led the Sequoyah Chief’s basketball team to the Region Championships and State Playoffs.

“I have a passion for teaching, learning and building lasting relationships with students,” said Adams.

Before coaching at Cherokee High School, Adams taught and coached in the Cherokee County School District for 12 years. As an Eagle, he made it a point to be involved on campus, especially with the Price School of Education.

“I was really involved in the education department, serving on about every committee possible at the time,” said Adams.

Adams majored in middle grades education, with a focus in history and language arts. He served on the original education committee that received the certification for the Price School of Education.

The local alumnus lives in the Buffington community with his wife Aimee and their two sons, Ethan and Aidan. They are involved at Mount Zion Baptist Church and many youth programs in their area. He describes his job as a “total family effort.”