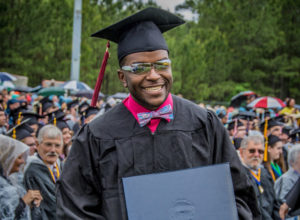 Justin Hawkins earned his Bachelor of Arts in Communication with a focus in digital film and video in May 2017. He recently was hired by Turner Broadcasting Systems.

Hawkins earned his Bachelor of Arts in Communication in May and officially joined Turner as a studio camera utility July 8. His degree focus was in digital film and video.

“I’m excited about everything from experiencing all the nuts and bolts of a television studio to being a part of live productions,” he said. “I’ll be working alongside the camera operators for Turner ensuring all of their cords are set up, out of the way and adjust as necessary as they have to move around.”

While at Reinhardt, Hawkins made the most of his experience, learning through many avenues both inside and outside the classroom.

“When I was in Dr. (Pam) Wilson’s classes and my other communication classes, they always pushed us to be professional and to be ready for whatever comes your way,” Hawkins said. “They taught us to never look at things one specific way and to look at options A, B and C and be ready to do something a different way, if the first option doesn’t work out.”

He spent all four years at Reinhardt working internet livestreams for athletics and working with the university’s Office of Marketing and Communications. He assisted with internet broadcasting for both the 2016 Commencement Ceremony and the 2016 Inauguration Ceremony for President Dr. Kina S. Mallard.

His senior year, Hawkins was a member of Reinhardt’s first wrestling team, and at the same time, he completed an internship with the university’s Office of Marketing and Communications and continued his work on internet broadcasts with the athletics department.

“Working with the marketing department was a good influence as to how to balance a heavy work schedule since I was a full time student and wrestler,” Hawkins said. “They helped me work on my time management skills and how to balance various projects and activities.”