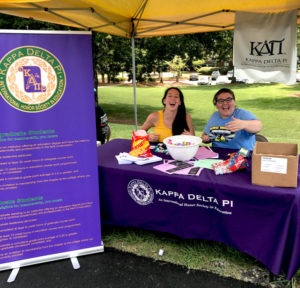 Reinhardt University’s Kappa Delta Pi (KDP) chapter, Alpha Zeta Xi, was recognized for the effectiveness of its chapter with the organization’s Phoenix Award, an award presented for taking significant action toward the overall improvement on the level of impact in a chapter’s programming and management.Kappa Delta Pi earned the honor for its Little Free Library project dedicated to Harriett Lindsey, a late Price School of Education professor who left a tremendous impact on Reinhardt University.

Chapter Program Awards honor chapters for their contributions to KDP and the world of education. Recipients have demonstrated excellence in one of the programs six areas: communication, professional development, membership, fundraising, and education for sustainability.

“We earned the Phoenix Award because we managed to bring the masses of the education world together to commemorate Harriett and to get our next generation engaged and excited to enhance their literacy skills with a project as awesome as the library,” said former KDP secretary Hannah Hale ’18, who headed up the project that was unveiled in February.
Hale joined the honor society believing it would serve as a great opportunity to join a community of educators and build connections.

“This project taught me the importance of a community, how amazing it is that all these people will set their time and efforts aside to help accomplish a better foundation,” said Hale. “It was rewarding in more ways than one, for sure. KDP is built around a great family away from family.”

Hale attributes her membership to bringing her closer to the kind of teacher she hopes to become.

“It is so much more than going to work, teaching, and going home. It is all about the in between, it is about the people you meet and the differences you make in the world,” said Hale. “That is all I ever want to do, is to leave this world better than I came into it and KDP has shown me how to do that in the ways of an educator.