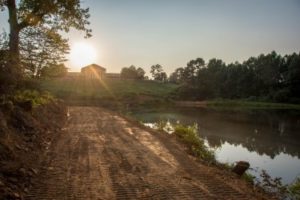 An addition to Waleska’s University in a Park is taking shape and is expected to bring a comforting, fun place for people to enjoy.

The Lake Mullenix project officially got underway in June, with clearing beginning on June 14.

“An excavator, forestry mower, tree cutting team and a Bobcat were used to remove the very heavy brush, dead trees and debris from the edge of the lake and surrounding area,” said Missy Dayoub, director of the Physical Plant. “The excavator then cut and created a wide path around the entire circumference of the lake. It was fascinating to see this take place.”

The walking path’s intended purpose is to offer a place for students, faculty and staff to get in some exercise and well as allow for a “cut-through” from the Fincher Art Building to the Falany Performing Arts Center.” 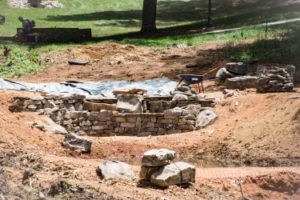 Later in the project timeline, steps will lead from the path up to the FPAC, Dayoub said.

Beautification also is a large part of the project, which will bring “uplighting” to trees around the lake and fountains.

“Two large ‘pool’ areas were created on the campus end of the lake close to the Burgess Echo Garden with a dam in between them,” she said. “These pool areas will be approximately 2-4 feet deep and will be lined and filled with river pebble.”

Going toward the lake from the “pools,” a natural stream bed will remain, and the stream will lead into Lake Mullenix.

In addition, a large, lit fountain is planned for the center of the lake, and a pump will be installed to keep the water cycling up to the pools and back down to the lake, Dayoub said.

Relaxing areas around the lake will include a large patio by the pool areas toward the center of campus and a patio on the Dobbs side of the lake. 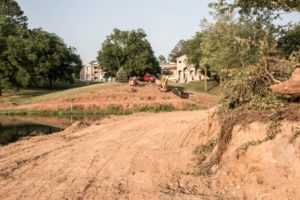 “There will be a block retaining wall installed on the Dobbs side of the lake and beautiful boulders allowing easier recreational access to the lake edge for fishing or just hanging out,” Dayoub said.

The project is being done by Treemaster Inc., owned by Robert Stone, who has had a decade long relationship with the University. It has been the University’s tree removal and tree maintenance provide.

“Robert is way more than just a ‘tree guy.’ His vision on projects like this is excellent, and he has been on site himself leading his crew through all of the work,” Dayoub said. “The scope of this project is more than our staff could handle alone. Robert has been incredible to work with.”