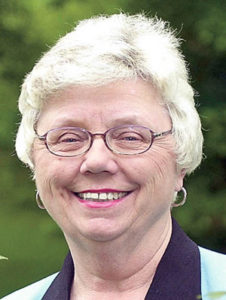 A few weeks ago, I mentioned that some students refer to Steve Dietz, husband of Reinhardt University’s first female President Kina Mallard, as the “First Dude.” While he is very involved in campus activities, that is a fitting title. He cheers on athletic teams, walks Bentley, “The First Pooch,” and participates in other things taking place on campus.

He is easily recognizable since he is very tall and he looks just as comfortable in his jeans as he is in his tux.

In the world of business, the “First Dude” Steve Dietz has a more formal title. He is the director of business development of Food Donation Connection in Knoxville, Tennessee.

In explaining what the company does, Steve tells the Biblical account of Jesus feeding thousands with five barley loaves and two fish and then directing his disciples to, “Gather up the fragments that remain, that nothing be lost.” KJV John 6:12. There were 12 baskets of what today we would call leftovers.

Steve Dietz believes in and is passionate about what he does. It is like a calling for him. There are no gray lines with him. Things are either right or they are wrong.

Wasting food is wrong. Hence, working with Food Donation Connection is a good fit for him. Organized by Bill Reighard, the mission of the company is, “Let nothing be wasted.”

As the director of business development of Food Donation Connection, he is involved in feeding the hungry, not only in our country, but increasingly expanding around the world.

Recently, he was a panelist on a National Restaurant Association workshop at Harvard University, “Reduce and Recover: Saving Food for People.” Plus, he is cited as an adviser to a Harvard publication, “Keeping Food Out of the Landfill: Policy Ideas for States and Localities”

Steve explains that there is no shortage of food in America or in the world. The problem is the logistics of getting it to the people who need it. That is exactly what Food Donation Connection does.

Not too long ago, I was in a local supermarket just before closing time. The people working in the deli were taking up the fried chicken, green beans, etc. My question was, “What happens to all that food?”

I got the answer I expected, but it was not what I wanted to hear. “We put it in the garbage.” Paraphrasing the language from John 6:12, “The fragments that remained were lost.”

Then I asked, “Why isn’t it given to the battered women’s shelter or something like that?” The answer was simple. Management is afraid someone might claim the food was tainted and caused them to get food poisoning. Then there would be a costly law suit.

The clerk and I talked about the many people there are in Cherokee County who could use the food that was being thrown away. Many are in walking distance of that supermarket.

Several years ago, Tufts University did a study of hunger in America. They reported that at that time, 36 million people, 14 million of them children, are in what they called food insecure homes. That meant they might or might not have all the food they need. Often cited was that people with income below the poverty level sometimes had to make a choice between heating their home and paying the rent or feeding the family.

Food Donation Connection coordinates the donation of prepared, perishable food to local nonprofit organizations nationwide and in other countries.

Lest you and I misunderstand, this food has not been served. It is what is leftover in the kitchen at the end of the day.

We often are told to “follow the money” to understand how something works. I was wondering who pays for what.

Steve made his explanation simple. Businesses get a tax deduction for the donated food. Food Donation Connection gets 15 percent of the taxes that the businesses save.

For that, the company coordinates the annual donation of 40 million pounds of surplus prepared food, provides training for employees on packaging the food, determines the value of the donation, handles the tax preparation, etc.

Company leaders have also influenced legislation providing protection from lawsuits for those who donate the food.

At home at the president’s residence on the Reinhardt campus in Waleska, sometimes Steve becomes the cook. He has a smoker and loves to use it. He praises Kina for her tasty baked beans that go well with whatever he smokes.

With a blended family of five children, in-laws, their first grandchild, friends and student groups galore, they have many opportunities to entertain.

As he is preparing for their guests, he probably is remembering the company’s mission statement, “Let Nothing Be Wasted.”

You and I should make that our mission, too.

Reprinted with permission from the Cherokee Tribune