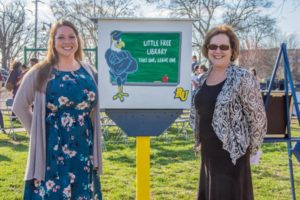 Price School of Education faculty and students conceived the idea for a Little Free Library to honor Lindsey. Hannah Hale, a senior from Villa Rica, brought the idea to Dr. Mallard, seeking her advice on how to approach the implementation of the idea.

“We thought about how much it would mean to Harriett Lindsey to dedicate the library in her honor,” Hale said. “I wanted to get Reinhardt’s education program more involved in the community.”

Hale stood with Dr. Mallard before audience members ranging from elementary-school students to retired professors. By the end of the ceremony, each could appreciate Lindsey’s influence on their education.

“What I saw standing before me that day was what I would imagine is the type of student that Harriett Lindsey would have encouraged: a student who had big goals; a student who was willing to work hard; a student that had a vision; and a student that wanted to make a lasting impression on the world, and Hannah, you have done that,” Mallard said.

Lindsey passed away on Easter Sunday last year, after a 41-year teaching career at Reinhardt. As a professor, she developed Reinhardt’s Working Adults Into Teaching (WAIT) program, helping hundreds of adult learners achieve their dream of becoming a teacher.

“Because of Harriett, I took every education course offered at Reinhardt,” said Susan Buice, one of Lindsey’s former students and a retired educator herself. “Now let me say, there weren’t many — only three or four — because Harriett was the entire education department. It was a department of one. By the end of my two years at Reinhardt, because of Harriett, I knew without a doubt that I wanted to be a teacher.”

Speakers reflected on how Lindsey’s encouragement developed both the individuals around her and Reinhardt’s growing education program.

Dr. Maxine Hess called Lindsey her “partner in crime,” recounting their adventures in Europe, Bermuda and at home.

“Most of all, though, what I remember about Harriett was that if I came to Harriett and said, ‘Oh, we’re not going to be able to do that,’ she would say, ‘Yes we can,’” Hess said.

“Just as the shiny and new is remembered, but the rock-solid foundation is often forgotten, so too is Harriett’s legacy so often forgotten,” said Miller. “Today, we’re celebrating what I call the founding mother of the Price School of Education.”

Buice said she was thankful for Lindsey pushing her students to their potential and for imparting a legacy at Reinhardt and beyond.

“She touched everyone she knew,” Buice said. “She changed me, just as she changed her other students, who in turn changed their students. Just look around today: She’s here. In this library, her legacy continues — one book at a time and one student at a time.”

The library is located in Brown Park, across from Canton City Hall, and is stocked and open to the public.