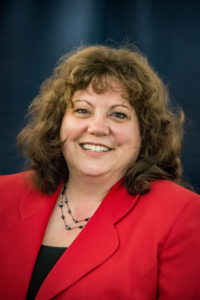 Dr. Glynis Blackard has come full circle in her nursing career but not without roadblocks she thought may be in the way. She said God has opened and closed doors for her along the way, and it was taking a step in faith that ultimately led her to Reinhardt.

Dr. Blackard started nursing school at 16 years old. She became what is known as a diploma graduate nurse working at Baptist Memorial Healthcare in the Memphis area. She gained a lot of clinical experience through Baptist’s School of Nursing and working at the hospital. After getting married and having children, Dr. Blackard went back to school, earning her Bachelor of Science in Nursing.

“I started working in surgical neuro ICU right out of nursing school,” she said. “I was there for a while and decided I wanted to make a change and went to the recovery room (now known as the PACU-post anesthesia care unit).”

That was an excited job for her, as every case was different and she never knew who would come out of the operating room, from a child to a high-risk cardiovascular patient.

“It kept my skills sharp,” Blackard said, adding the hospital had a bedside clinical ladder, meaning nurses could earn promotions and climb the ladder but could remain working at patient bedsides. “That’s also when I learned that I loved to teach.”

Dr. Blackard’s career would continue over the next several years to take twist and turns, and at no point was she actively looking to switch her focus.

When case manager positions were unheard of, Dr. Blackard got the opportunity to write a proposal for a position. She presented it and was granted the position.  “I learned that I loved to develop things,” she said.

Her next unexpected move was to become the director of surgical services for Baptist Healthcare, and as the hospital grew and turned into a health system, more changes were coming her way. Her job began to turn more corporate and she would travel through Tennessee, Arkansas and Mississippi to the different hospitals as she worked on hospital accreditation. She would end up with an corporate executive role handling patient safety and quality.

Her daughter, a student at Union University, called. Because of Dr. Blackard’s position in the Baptist Healthcare System, she knew what was coming. She was home with the flu monitoring incoming weather and prepping for a catastrophic disaster.

Her daughter, Candice, had just returned to her dorm. Students all were on the main level as they planned to ride out an incoming tornado. Dr. Blackard would tell her daughter to stay put.

The next call was filled with sirens and screams and cries.

Candice was trapped in the bathtub underneath rubble. The EF-4 tornado decimated Union University’s campus.

The line went dead, so naturally, Dr. Blackard began to panic. A picture came across the television coverage, and it was her daughter’s dorm showing where she was.

“I knew she was buried beneath all of that,” Dr. Blackard said.

It would be another 45 minutes or so before her phone rang again from a number she did not recognize. Candice’s friends had dug her out of the rubble and she was running to safety.

It was in that moment that Dr. Blackard realized how short life is, and it was time for her to make some decisions.

“That event changed my family’s life. It made me remember to re-evaluate and what do I really want to do? Life is really short,” she said. “I had always wanted to be a professor to teach nursing, and it got my attention that maybe this is where God wanted me to be.”

So she stepped out in faith and quit her well-paying job of 25 years to go back to school. She earned her Master of Science in Nursing and went on to get her Ph.D.

“God provided a way and a means, and it became very clear. I have never felt so certain,” she said.

Her path would lead her next to Union University where started as a faculty member and later was promoted to department chair. While at Union, she opened the university’s School of Nursing satellite campus in Hendersonville, Tennessee, from the ground up. Now, she gets to do a similar project at Reinhardt.

“I prayed about it long and hard and that is how I ended up here,” she said. “I feel like God has led me here. I have a passion for nursing and I am looking forward to teaching students how to be quality nurses where they can daily impact and change lives in the individuals and community they serve.”