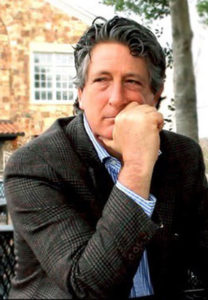 As Bill Walsh worked on his latest collection of poetry, he began to see himself as an American Realist, much like that of his favorite painters, swapping paint for words.

“American Realism, 1974,” a piece from Walsh’s recent poetry collection “Fly Fishing in Time Square,” was recently nominated for publication in the “Pushcart Prize: The Best of Small Presses,” published by Pushcart Press. “The Pushcart Prize” has published thousands of American writers since 1976.

Walsh, director of Reinhardt’s MFA in Creative Writing, found himself surprised and pleased with the nomination, which comes after the book’s success - numerous reviews of praise and the Editor’s Prize at Cervena Barva Press.

“I’ve been very fortunate,” said Walsh. “The interesting thing about the nominated poem, is that it is not my best poem, or at least I don’t consider it the best. However, and this is the wonderful thing about a book of poems, you never know what will speak to the reader.”

Walsh’s favorite contemporary painters since World War II are Jackson Pollack and Edward Hopper and feels a kindred spirit with Hopper, feeling like a person “on the outside always looking in through the window into places they don’t belong or are not allowed to enter, absolute alienation.”

“My artistic life is always a person alone, looking into or out of the window at the world, observing and rarely being invited to be a part of the ‘in’ crowd...that is how Hopper painted the world.”

This connection gave Walsh the inspiration for his Pushcart-nominated piece.

“One day, an idea popped into my head: what would Edward Hopper paint if he painted my life. I turned it around and wrote, ‘If Edward Hopper were to paint my childhood...’”

In the next two years, Walsh plans to publish his debut novel “The Pig Rider,” and a second novel, “Lakewood.” He is also editing a poetry anthology called “The Poet Speaks,” a collection of 60 poets discussing one of their poems, how they wrote them and their nuances.

At Reinhardt University’s Etowah Valley Master of Fine Arts Program, writers create a literature that is story-driven and grounded in the places where we live, whether rural or urban. Reinhardt is the only higher education institution in Georgia offering a low-residency MFA in Creative Writing. The 60-hour low-residency MFA in Writing offers classes in poetry, fiction, creative-nonfiction/memoir, and scriptwriting (film, TV, and stage).

If Edward Hopper were to paint my childhood

he would flat wash dusty golden hues, an ambience

of the blues, hours practicing on the diamond,

splashing in creeks and turning over flat rocks

for crayfish. There would be a speckle of smitten crushes

scattered about for several freckle-faced girls.

He’s a good boy, the neighbors would say, a kid you can count on

to do the right thing—mower of lawns, funeral director

for stray dogs, car washer, not too hot at math

but always slapping a tall tale. If Hopper stood in the street

outside my house, peering through the picture window

like in Nighthawks, there would be, as with all houses,

a shadowy man in a fedora, hiding

a secret about the couple drinking coffee, unlit cigarette,

no ashtray, just a hint of the sultry to stir things up.

Even the soda jerk has a history he keeps hidden.

In Villa Park, Illinois, there’s a man with a story

of wretched debauchery that took place years ago

behind Morales Hardware. Surely, by now

he lives elsewhere, hunched over,

sitting at the counter of some late night café,

coffee mug cupped to his face,

bending an ear to strangers about hooligans,

delinquents of the lowest order with nothing better to do

on a Sunday morning than smash the windows

of his ’54 Packard Clipper, a blue as deep as the ocean.