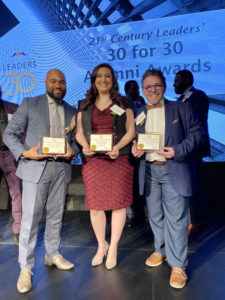 Maria Flores Blackburn ’15, Timothy Parham ’11 and Dr. Randell Trammell ’03 ’09 earned the “30 for 30” recognition from the leadership program at the close of 2019. They were honored during a celebratory reception Jan. 16 in Atlanta.

“It is truly a privilege and pleasure to Reinhardt alumni being recognized for being engaged leaders in their communities and in their professions,” said Dr. Walter May, dean of students, who attended the reception. “Being able to watch these individuals grow and hone their leadership skills has been so rewarding and inspiring for me. They came to Reinhardt with so much passion, confidence and skills that they received through their experience with 21st Century Leaders. It is a testament to their 21CL experience that they were able to make such a positive impact while enrolled Reinhardt. Each of them left a legacy here at Reinhardt and continue to be active alumni and supporters of the University.”

“It is a great organization that offers many wonderful programs and opportunities for high school students,” said Trammell. “I am particularly thrilled that of the 30 honorees, 10 percent of them are Reinhardt alumni. To me, that makes a remarkable statement about our University's commitment to developing students into leaders for our communities and our state.”

Since graduating from Reinhardt, all three alumni continue to grow as leaders in their fields. Trammell earned his education doctorate in Organizational Management and Communication and founded the Georgia Center for Civic Engagement. He works closely with the community as President/CEO at the State YMCA of Georgia Y Clubs.

Blackburn attributes her honor to the organizations that built up her leadership skills.

“I am so honored to be recognized as a leader in my community, but I think my recognition is just proof that organizations like 21st Century Leaders and Reinhardt University are developing the future leaders of our community, and I love that I am in a position now where I can give back to these organizations.”

Blackburn worked for a top Atlanta certified accounting firm before becoming a tax accountant for Southern Company, a Fortune 200 company she discovered while in the 21st Century Leaders program.

Both Trammell and Blackburn thrived as leaders early in their careers and were recognized by Reinhardt University, receiving the 10 under 10 Award in 2012 and 2017, respectively.

Parham spent seven years as the teen program manager for the nonprofit YELLS, Inc. He since started the MAP Foundation, a nonprofit focused on his passion for music and preparing youth for the future.

“Ultimately, my goal was to make a fluid connection between home, school and the community,” Parham said of his position with YELLS.

The three utilized 21st Century Leaders in high school to begin focusing on leadership skills at a young age. Blackburn says the program provides connections to learn from each other and from business and community professionals across the state.

“I wanted to learn about the different career paths I could take, and they provided me with direct connections to business professionals who I could be mentored by,” said Blackburn. “I also wanted to join to develop my leadership skills and become a more confident leader.”

Trammell also appreciated his time spent with business professionals and “experiential opportunities in entrepreneurship.” He learned the importance of relationship, a value he still holds to today.

“While I participated in several leadership development programs prior to my time at Reinhardt, each of them instilled in me the importance of relationships with others as the key foundation for being a leader,” Trammell said. “Today, relationships are still my No. 1 priority whether I am dealing with my staff team, business partners or constituents.”

“I think the most valuable thing I learned in the program was how much potential I had,” said Blackburn. “The program gave me an opportunity to showcase my leadership skills by working on special projects with a diverse group of students, and I was given many opportunities to do public speaking in front of students and business professionals which helped me grow confident in my abilities.”

Parham’s time with 21st Century Leaders and Reinhardt prepared him for a leadership position where seeing others succeed made him feel the most accomplished.

“The biggest awards I received was watching youth that I worked with graduate with their  GED or high school diploma,” said Parham. “I never have really shot for recognition. I would rather be the person cheering others on as they achieve their goals.”

After their involvement in 21st Century Leaders, the three alumni built on their leadership knowledge through student involvement at Reinhardt. Blackburn, a first-generation student, served as an Admissions Captain and member of the Student Government Association, becoming Student Body President and speaker at her commencement ceremony. Trammell also served as Student Body President while earning his undergraduate degree and returned to join Reinhardt’s first class of MBA students. He spent eight years on the Alumni Board of Governors and continues serving on the President’s Advisory Council. Parham also led student tours and was a resident assistant. He sang and lead the alma mater at his graduation.