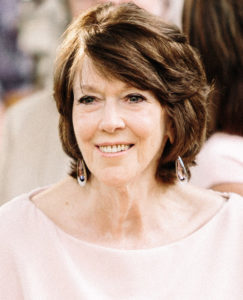 A beloved member of the Reinhardt family passed away Sunday, but Joan McFather’s legacy remains strong in the many imprints she left.

McFather’s love for Reinhardt showed through her support and volunteerism. She served as an active member of the Reinhardt Board of Trustees for four years, including serving on the Executive and Business & Grounds committees, as well as chair of the Academic Affairs/Enrollment Management committee. For nearly two decades, McFather also volunteered her time as a docent of the Funk Heritage Center, participating in the living history tours.

“Joan’s incalculable contributions to Cherokee County and Reinhardt University will not be forgotten. Her legacy of service and commitment to the betterment of her community stands as an inspiration to all who knew her,” said Reinhardt President Kina S. Mallard. “We extend our heartfelt condolences to her family during this most difficult time.”

Jessica Akers, director of the Falany Performing Arts Center, worked closely with McFather, as she served the Falany PAC in several different roles.

“Joan was one of the founding Patrons of the Falany Performing Arts Center, a longtime usher, and active Advisory Board member,” Akers said. “She never backed down from a challenge, especially when she knew the outcome would bring opportunities for enrichment to others. She led with her heart and invested her time and talents to anything she took on. Her quick wit, outgoing personality, and passion for life made her easy to love and connect with. She was one of the driving forces behind the Falany, and we will deeply miss her presence.”

McFather’s volunteerism extended outside of Reinhardt. She served countless hours with organizations including the Service League of Cherokee County, Cherokee FOCUS, the Cherokee Arts Center and the Juvenile Court Citizens Review Panel. She volunteered her time as an ambassador for the Cherokee Chamber of Commerce. She made time to enjoy her love of gardening and became a certified Master Gardener after retiring after 30 years of teaching English at Cherokee High School.