Reinhardt University held its first December Commencement Ceremony on Thursday, as family and friends of nearly 100 graduates filled the James and Sis Brown Athletic Center gym to celebrate their final moments at the University that they’ve come to call home. 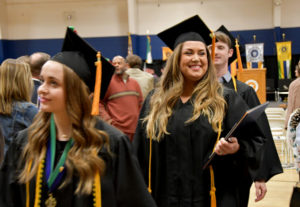 Jessica Fanczi addressed the Class of 2019 by reminding her peers of the community they created throughout their time on campus by connecting and coming together in the highs and lows of their college careers. She recited “Rabbi Ben Ezra,” from Victorian poet Robert Browning, whose death anniversary was exactly 130 years ago that day.

Fanczi chose the poem to emphasize that, while college often feels like it contains the highest highs and lowest lows of one’s life, that “the best is yet to be.”

“We have all lived through those difficult moments; some of us have encountered sickness, heartbreak, and death during the last few years,” said Fanczi. “In September, the Reinhardt family lost one of our own, Alexis Taylor. In these moments of grief and trial, we rightly comfort ourselves with the knowledge that the best is yet to be.

“And then there are the high points...In these times of victory and accomplishment, it can seem like our college years are the pinnacle of existence, like there’s no way life could possibly become more fun or joyful or interesting than it is now. We step out into the world with the unshakeable certainty that there are at least 100 kind, gracious, intellectual, passionate people who are actively making it a better place, and this knowledge fills me with hope. Because of each and every person in this room, I believe, as Robert Browning did, that the best is yet to be. The best for our own lives. The best for Reinhardt. And the best for the world.”

Sheriff Frank Reynolds ‘96 ‘10 took to the podium to offer the graduates wisdom he has collected along the way of his nearly 30 years in law enforcement. He encouraged graduates to make smart decisions and reminded them that a lifetime of respect earned can be tarnished in mere seconds.

“Live by the 20/20 rule. It can take 20 years build a strong reputation but only 20 seconds for it to be tarnished,” Reynolds said.

Reynolds, who earned a Bachelor of Fine Arts from Reinhardt in 2010, also encouraged those who felt compelled to return to school and further their education.

“When I returned to Reinhardt, I had felt that twinge, like I needed to come back and earn my bachelor's degree. If you feel that twinge, I encourage you to follow that and earn your degree at Reinhardt.”

Provost Dr. Mark Roberts closed the ceremony by reading his poem, “Thrive in the Fullness of Light,” written for the inauguration of President Kina Mallard—this time with additions that nod to Reinhardt’s first graduating nursing cohort.

Congratulations to the Class of 2019, whose constellation of legacies will continue to thrive as they take off on the next paths of their journeys.