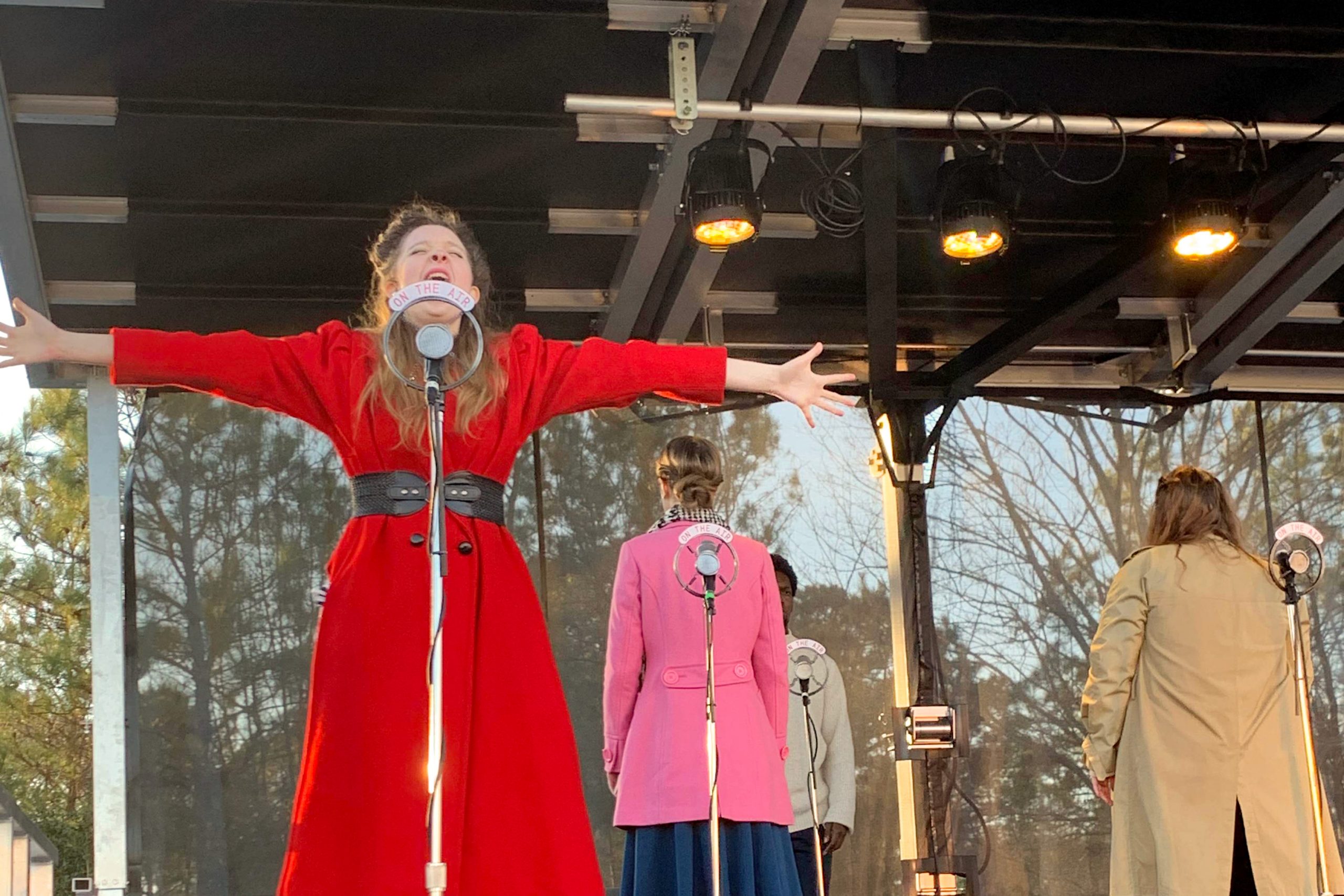 Last March, the Reinhardt Opera Theatre program prepared for opening night of “The Sound of Music” to be silenced due to the pandemic. A year later, the program held an innovative, three-night performance utilizing the Falany Performing Arts Center’s new outdoor stage.

“A Night of Menotti” consisted of three performances each night: “The Telephone,” “The Consul” and “The Old Maid & the Thief.” The actors performed “radio” style which is  loosely based on old-time Radio Hour with each performer standing on a box on the stage, socially distanced, and using microphones – not a typical tool used in opera.

Reinhardt’s Opera program found a creative way to perform Mozart scenes in the fall  utilizing the Donor Plaza. With the Falany’s recent addition of an outdoor stage – to be used in their upcoming events – the actors got closer to their usual platform while still performing safely outside.

In their most recent performance, Dr. Rachel Holmes, director of opera at Reinhardt University, used various strategies to prioritize the health and safety of the actors. To add context, cue cards were strategically shown to the audience in place of movement or props.

“The production was highly professional and entertaining, and the singers were outstanding,” said Dr. Fredrick Tarrant, dean of the School of Performing Arts. “The characters’ texts were always audible and clear, and Dr. Holmes’ staging was wonderfully creative to compensate for COVID-19 needs for social distancing. Audience cue cards were particularly clever and effective, humorously filling in plot details for the audience. It was fun to hear the audience engaged with the performances and reacting to the comedic details.”

“The opera students at Reinhardt tackled some very challenging repertoire, and I think they all grew a lot,” said Brian Osborne, music director for opera and musical theatre. “Performing outdoors is challenging, but the COVID era has made us think outside the box. I’m happy to say that the students have had performance opportunities despite the circumstances.”

The cast received their music before winter break, returning to the spring semester ready for musical rehearsals. Through this unique process, Fiona Garner, who starred in “The Consul,” learned how to trust the director and be flexible – and have fun while doing it.

“Rachel is such an amazing director, she honestly made it seem as normal as possible, especially with the radio style,” said Garner. “She made it tell the story and that’s all we need to do as actors and as singers. She’s just so brilliant and she outlines things so well with the score.”

Holmes along with the staff and students chose to “not stagnate but innovate” in the face of finding new ways to perform.

“It is pushing students to show humor, intimacy and the complexity of relationships without the usual ‘trimmings’ in non-COVID times, such as full sets, props, lighting and physical contact in staging,” said Holmes. “The students have, therefore, had to focus more on the nuance of body language, facial expression, diction, inflection and coloring their voices to depict larger-than-life operatic personalities in a limited space.”

“While I look forward to returning to full productions indoors, this outdoor venue demonstrated that the Reinhardt Opera can thrive during a pandemic every bit as well as the Atlanta Opera has been able to with their similar outdoor performances,” said Tarrant.

Many aspects of life and learning have changed in the past year. Reinhardt’s perseverance and innovation continue to thrive in the face of adversity, as shown through the School of Performing Arts.