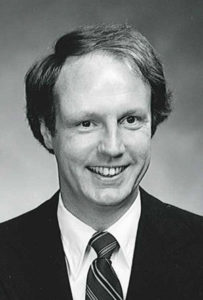 Curtis Allen Chapman II, a man with grand artistic talent and a passion for teaching, passed away peacefully Aug. 7. He was 73.

Chapman was a mainstay in the Reinhardt art department for four decades. Reinhardt was dear to Chapman’s heart so much so that his family has created a scholarship at the University in his memory.

He began his career as an art professor at Reinhardt in January 1966 and earned tenure in 1978. Over the years, he taught studio art to art history, something he really enjoyed.

“As a teacher, he was tireless and always willing to take his time with students,” said Brett Mullinix, Assistant Professor of Art and Fine Arts Program Coordinator. “He was a printmaker and painter for the most part but I will never forget a conversation we had about teaching. He said, ‘Brett, I really love teaching studio art but my passion is teaching art history.’ He was very fortunate to have been able to do only that his last few years here.”

Chapman retired in May 2005 and continued as an adjunct professor during the 2005-06 school year. The Reinhardt Board of Trustees granted him Professor Emeritus status in 2006.

Dale Morrissey, director of development and external affairs for RU, has fond memories of Professor Chapman. As a working adult finishing her undergraduate degree, she found that Chapman was willing to help those in dire circumstances. She recalls having to phone him one day to say she would have to take a zero on the exam. She was working at a local bank and had people out for whom she had to cover. Instead of giving her the zero, Chapman showed up at her work and administered the exam in her office.

He recognized that Morrissey had not missed class and was on time with her work and studies, so he helped her out when she was in a bind.

“Mr. Chapman was a caring professor. Having a full time job, raising children and going to school was a challenge. He understood the challenges and worked with me,” Morrissey said. “He was not only a great leader, I also considered him a friend.  He loved Reinhardt University and worked hard to build a program that is still here today. He is a legacy, and I am honored to have known him.”

Chapman was bestowed an Honoree Award at the 2012 Talon Awards for his dedication to Reinhardt. During the awards gala, he told the crowd that “it was a special privilege to work there,” adding “I didn’t apply to Reinhardt. I was recruited. I think many times I stood trembling, wondering why I was given such a wonderful privilege to discover my calling … Reinhardt changed my life, as it has so many other people I have worked with and met there.”

Mullinix said Chapman left a lasting impression on the art program at Reinhardt, including helping to design the Fincher Art Building.
“His impact on the art program was immense. He was instrumental in helping Garland Reynolds in the design of our current art facility, he loved the Renaissance,” Mullinix said, adding it was Chapman who brought him to Reinhardt. “Curtis was the man responsible for bringing me into the Reinhardt family. He was very kind and patient and made me feel at home from the very first moment I arrived. He invited me into his home which was filled with art works he had collected through the years and we had many conversations about art, Reinhardt (a place he dearly loved) and his vision for the program. On a personal note he was one of the most kind and caring men I have known. He will be missed.”
While Chapman formerly lived in Canton, he and his wife moved to Lake Junaluska, N.C. He is survived by his wife, Daphne; children, Christopher Allen Chapman (Lynn) and Carrie Ann Chapman Willingham (Dr. Thomas Willingham); brother, Bennett Chapman (Carlotta); step-mother, Florence Chapman; and his grandchildren, Barrett, Meredith and Elizabeth Willingham, and Ethan and Amelia Chapman.

Memorial gifts may be made to The Curtis Chapman Art Scholarship at Reinhardt University.